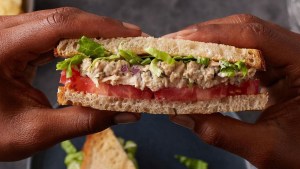 Residents in one of the UK’s biggest fishing cities will be gifted vegan tuna for World Oceans Day.

Those living on Ocean Street in Plymouth will receive a delivery of plant-based tuna from Good Catch today, as well as a vegan starter kit.

Dr. Carys Bennet is PETA’s Senior Corporate Liaison. She said: “Just like us, fish can feel pain and fear, have unique personalities, and value their lives.

“PETA is teaming up with Good Catch to show how easy it is to enjoy the taste of the sea without killing. We’ve all heard of dolphin-safe tuna – well, this is tuna-safe tuna, and it’s the future of seafood.”

Moreover, Chad Sarno is the co-founder of Good Catch – owned by Gathered Foods. He added: “Our mission is to make plant-based seafood that’s good for the sea and the animals who call it home.

“So, we’re delighted to be involved in this project for World Ocean Day with PETA.”

Sarno then concluded: “We’re continuously investing in innovation and product development. So, people can enjoy the taste, texture, and nutrition of seafood without harming animals or ingesting micro-plastic or toxins.”

Interest in vegan fish and seafood has skyrocketed following the roaring success of Seaspiracy.

The film, produced by Cowspiracy’s Kip Andersen, sheds light on the ‘war being waged’ on the world’s oceans – delving into the fishing industry’s environmental impacts on marine life.

The week following its Netflix debut, google searches for the term ‘vegan seafood’ skyrocketed; from March 28- April 3, the term garnered its highest search volume in the past five years.