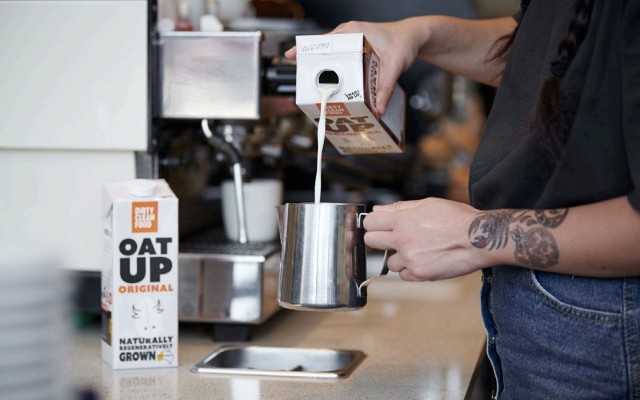 The plant-based regenerative and carbon neutral product is marketed under the Dirty Clean Food brand and is reported to have performed well with Perth-based prime distribution partner European Foods.

Initial traction has been strong in metropolitan grocery stores and cafés, and distribution is believed to be expanding weekly.

“We are thrilled with the positive uptake of OatUP,” he said.

“Our growing café, retail and distribution [network] has told us that customers are seeking out OatUP, as they can taste the difference of our WA-grown regenerative oats.”

South Australian customers include The Chapley Group, which operates six independent supermarkets in Adelaide including Pasadena Foodland and Frewville Foodland.

Ultimate said it had seen strong early interest from some of the state’s “shrewdest” grocery groups.

“The product is clearly resonating with a number of retailers and we are optimistic that the clean taste of regenerative oats and OatUP’s carbon neutral mission will be a match for our customers’ needs in this category,” the company said.

Plans are also in place to commence online sales of OatUP to Australian consumers during the current quarter, leveraging its success with the Dirty Clean Food digital platform.

Wide Open continues to engage with global partners to expand OatUP’s distribution beyond Australia, and has completed packaging prototypes for multiple markets starting with south-east Asia.

Market testing and tasting has commenced in Singapore, Hong Kong and Thailand with initial discussions also underway with potential customers and partners in the US and Europe.

Initial orders have been placed in Singapore and the company expects to announce its first Asian distributor relationship during the current financial year.

“Investor appetite for oat milk is at an all-time high,” he said.

“It is estimated the sector will continue to grow at a compound annual growth rate (CAGR) of 9.8% each year to 2027 and [oat milk] sales across the board are outpacing more established alternative milk types such as almond and soy.”

He said OatUP’s “carbon neutral” certification would ensure the product stands out and differentiates from competitors at the point-of-sale.