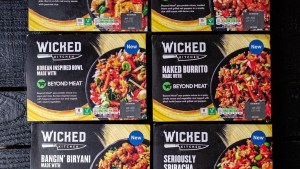 Supermarket giant Tesco is launching a range of vegan ready meals under the Wicked Kitchen brand – in partnership with Beyond Meat.

The collaboration is hitting shelves across the UK this week.

Additionally, there is a Bangin’ Biryani, and Seriously Sriracha Tofu & Rice.

All are displayed with two to three chili icons on the packaging, hinting that they may be spicy.

Co-founder of Wicked, Derek Sarno announced the news on Instagram.

The chef, who is also Director of Plant-Based Innovation at Tesco, said: “New launch rolling out this week! …Bringing some much-needed heat to the frozen plant-based category across Tesco nation.”

Whilst Sarno confirmed the range will be available nationwide, he did not confirm which stores were set see the new products on shelves.

Since its creation by renowned chefs, brothers Derek and Chad Sarno, Wicked Foods has skyrocketed to success.

It debuted in Tesco stores in 2018 and is now available in thousands of outlets nationwide. Moreover, the range doubled in size to meet the growing demand for plant-based food.

Additionally, late last year the brand announced it would expand into the US following ‘meteoric success’.

The exact details of the US launch are yet to be released.

Its product portfolio is set to extend into meat-free chicken, according to a new report.

Whilst it’s expected to be released this summer, no further details have been announced.

You can check out Wicked Kitchen’s complete range here