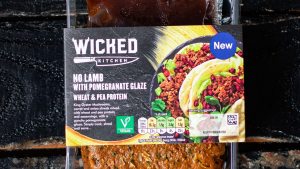 Vegan food brand Wicked Kitchen just debuted a plant-based whole cut lamb roast. The UK-based company says the product is the first of its kind on the market.

The No-Lamb Roast with Punchy Pomegranate Glaze is made with king oyster mushrooms and a pea and wheat protein blend. It’s available at Tesco, the largest supermarket chain in the UK.

“It’s easy to cook, roast, glaze and ready to shred, pull or slice,” he said. “Perfect for mid-week or Sunday Roasts, Middle Eastern-inspired wraps or some fancy pants tacos and more!”

The company also produces meal kits, such as Korean Style M’Shrooms Shreds and Shiitake Ramen Broth Kits. Ready meals are also on offer, including the Peng Panang Tofu Curry, Seriously Sriracha Tofu & Rice, and the Naked Burrito Made With Beyond Meat.

‘We’re going to change the world’

Chefs and brothers Chad and Derek Sarno launched Wicked Kitchen in the UK in 2018. Less than two years later, the company announced it had sold more than 10 million units of plant-based food.

This year, Wicked Kitchen crossed the pond and launched in the US, at Kroger supermarkets and Sprouts Farmers Markets.

As part of the launch, the company is encouraging consumers to commit to eating at least one plant-based meal a day for one year. If 200,000 people take the pledge, one million animals’ lives would be saved, according to Wicked.

On the company’s website, Derek states: “It is my personal mission to work with all of our partners and suppliers to set the gold standard in chef-driven plant-based foods for all others to benchmark. That is how we’re going to change the world!”