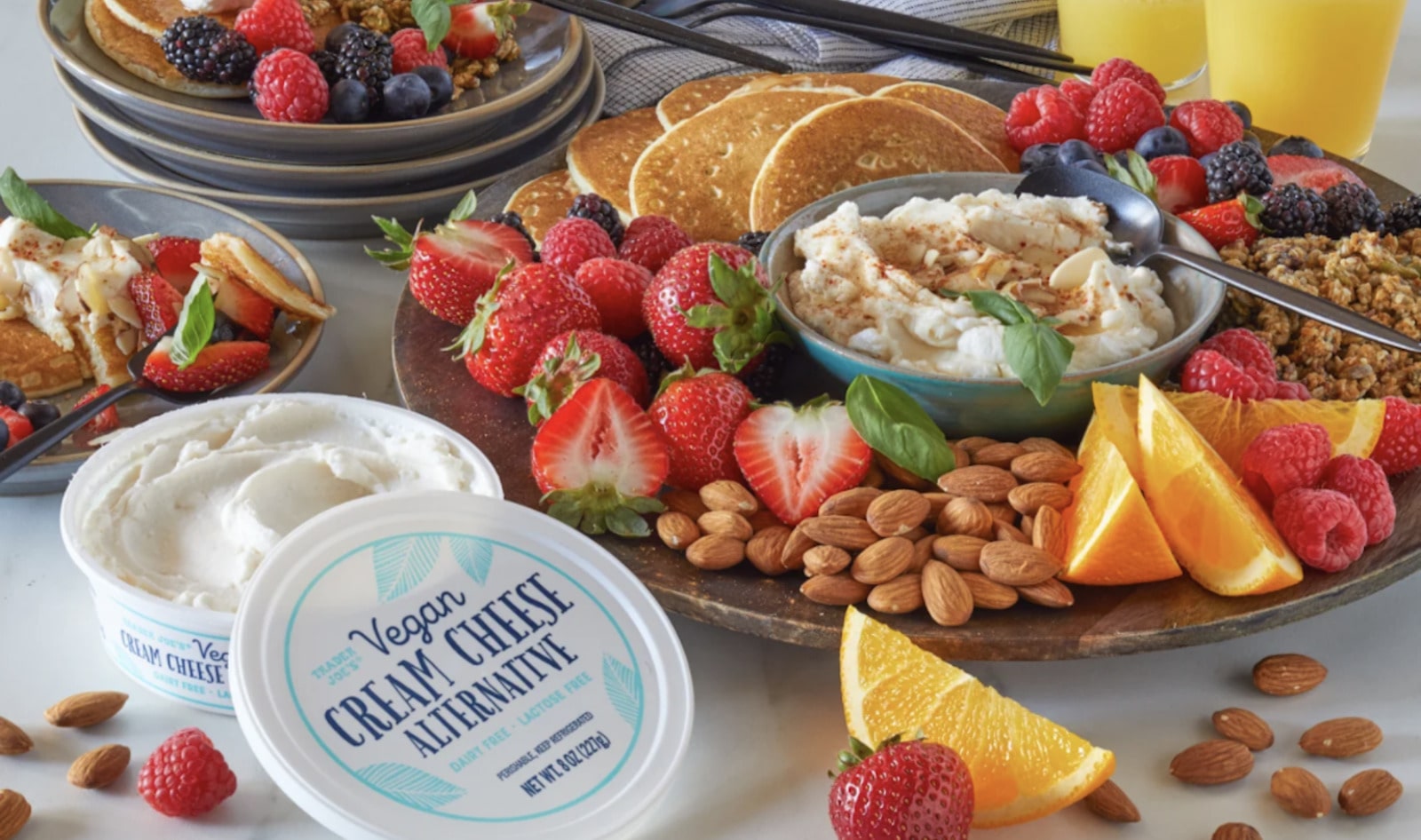 For something so simple, dairy-free cream cheese has become a behemoth of a topic. Some prefer a layer so thin it’s practically translucent while others prefer a two-to-one ratio of bagel to cream cheese. Then there are the flavors—plain, everything, chive, lox, cinnamon raisin (don’t @ us for that last one—it exists, even if you don’t like it). Whether searching for the best dairy-free cream cheese for bagels or for desserts, use this guide to navigate through the swirly, luscious wonders of a vegan schmear.

What is dairy-free cream cheese?

To make a vegan version of a traditional cow milk-dependent product, a few extra ingredients are needed. Different companies rely on different foods and techniques to attain that thick texture and mildly tart taste. Tofutti, for example, uses soy, an oil blend, and non-dairy lactic acid; more recent vegan cream cheese innovators such as Miyoko’s Creamery rely on cashews, coconut cream, and vegan cultures. One day, it might even be made from precision fermentation, an emerging technique that’s slowly making its way into the vegan food space. Only time will tell.

There’s a seemingly infinite number of ways to make it, but the general rule of thumb is the emulsification of fat, liquid, salt, and cultures, sometimes with the addition of a stabilizer.

While the ingredients for dairy-free cream cheese vary, the nutrition label across brands looks similar. Vegan or not, cream cheese is calorically-dense and high in fat, and “healthy” is a relative term. Because it does not use cow’s milk, it does not contain trans fat and tends to be lower in saturated fat than an animal-based schmear. Too much saturated fat is associated with higher levels of low-density lipoprotein (LDL), also known as “bad” cholesterol. High LDL levels can increase the risk of heart disease, according to the American Heart Association.

If you’re looking for one that’s on the better-for-you side, avoid the dairy-free varieties made from oil and stick to the ones made from whole food ingredients like nuts, seeds, or even beans. That’s not to say that oil-based vegan cream cheeses are bad for you. Oil can be a healthy part of your diet when consumed in moderation.

Below are our top picks for vegan cream cheeses whether you’re using them for breakfast, lunch, dinner, or dessert.

An outlier in the vegan cream cheese market, Kite Hill uses almond milk as a base for its many creamy spreads. It’s slightly thinner than other brands, but what it may lack in thickness it makes up for in flavor. Options include plain, chive, everything, and garden veggie.
Find it here

Looking for something with minimal ingredients? Miyoko’s is a solid choice. Made only with cashews, coconut cream, salt, and cultures, this stuff is as unprocessed as you can get in the schmear department. It’s super thick and velvety and comes in five flavors: classic plain, everything, Savory Scallion, Fish-Free Lox, and cinnamon raisin.
Find it here

From the makers of the novelty ice cream, this old-school vegan brand’s Better Than Cream Cheese lives up to its name. While newer brands may have received more hype, this schmear is perfectly serviceable in baked goods and on its own. You can find it in most grocers and it tends to be the most affordable option as well.
Find it here

The grocer is well on its way to offering a vegan option for every product it sells. Labeled as Vegan Cream Cheese Alternative, this plain spread is another win for all plant-based Trader Joe’s shoppers. Pro tip: mix in a few shakes of Trader Joe’s Everything Bagel Seasoning to make this schmear a bit more interesting.
Find it here

Name a dairy product, and this long-standing vegan company likely makes it. The brand recently reformulated its inaugural cream cheese to improve its rich taste and silky texture. Among the four flavors, our favorite is the Roasted Garlic & Herbs. Also, if you were wondering, it’s pronounced Day-ah.
Find it here

Perfect for baked goods like vegan cheesecake and cream cheese swirled brownies, Violife’s Just Like Cream Cheese is a relatively new product under this non-dairy food brand’s name. If you’re looking for the best vegan cheesecake recipe, keep reading for our top pick.
Find it here

Kroger’s Simple Truth Organic Plant-Based Cream Cheese Alternative is just one of the 50-plus new vegan products the name-brand line launched in the fall of 2020. When a major supermarket invests in non-dairy cream cheese, you know the “trend” is here to stay.
Find it here

Have you ever purchased a tub of non-dairy cream cheese only to realize you picked up the Chive & Garlic flavor just before making your vegan cream cheese frosting? Yep, we’ve been there. Go Veggie offers both Chives & Garlic and classic plain, and while both are creamy and delicious, definitely double-check the label if you’re making something sweet.
Find it here

After gaining popularity through its luscious, European-style soft vegan cheeses, it’s only natural that this company churns out a decadent dairy-free cream cheese. The three, minimal-ingredient flavors include plain, Chive & Onion, and strawberry.
Find it here

This vegan soft cheese brand differentiates itself from the rest by using sunflower seeds for its thick and creamy base. Each of the flavors is infused with probiotics to best mimic their dairy-based counterparts. Choose from original, strawberry, Smoked, Smoked Salmon, and Herb varieties the next time you have toasty bagels waiting for you at home.
Find it here

Popular dairy alternative brand So Delicious stepped into the vegan cream cheese space with two flavors: original and Chive & Onion. Both flavors are made from coconut oil and are perfect for bagels, crackers, sandwiches, and dips.
Find it here

This smooth dairy-free cream cheese is made from a blend of cashews and coconut cream. It gets a boost of gut-healthy bacteria from the strain lactobacillus cultures plus, it’s versatile enough to use as a spread or in decadent desserts.
Find it here

Known for its vegan sour cream and butter, this plant-based brand’s cream cheese features a base made from organic butter beans and organic oats. The result is a dairy-free spread that has a thick texture, perfect for bagels and crackers.
Find it here