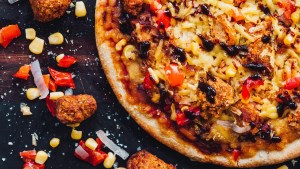 Plant-based food One Planet Pizza is set to save one chicken per 20 sales of its new collaboration.

This comes with the launch of a new pizza, in partnership with vegan fried chick*n brand, VFC.

The No Clucks Pizza collaboration comes as part of National Friend Chicken Day. The event is taking place today, July 6.

The national holiday originated in the US and usually involves a plethora of eateries offering special offers on fried chicken meals.

However, One Planet Pizza is joining forces with VFC to do the opposite.

The brands estimate they can save the life of one chicken as a result of using VFC’s Southern Fried Chick*n Popcorn pieces as a topping instead, with every sale of 20.

It’s hoped the collaboration will propel VFC’s mission to keep chickens off the UK’s pizzas.

Speaking on the collab, Glover told PBN it’s ‘time to dismantle’ the ‘injust system’ of factory farming, where chickens spend their entire lives in cramped conditions.

‘The No Clucks Pizza from One Planet Pizza is set to create a revolution at the dinner table. So, join the sit-down protest and tuck in’, he added.

Each Popcorn piece is packed with a corn flake coating, served on a hand-made pizza base. Additionally, other toppings on the No Clucks Pizza include red peppers, red onion, sweetcorn, cheezly vegan cheese, and BBQ sauce.

‘All your bases covered’

Additionally, with each sale, 50p will be donated to Big Red Rooster. The shelter rescues and rehomes cockerels.

One Planet Pizza’s Co-Founder is Joe Hill. In a statement sent to PBN, Hill said: “Whether your household is divided between meat-eaters and vegans, pizza-lovers or chicken addicts, the No Clucks pizza has all your bases covered.

“Globally, more than 66 billion chickens are slaughtered every year for food, producing 790 million tonnes of CO2 equivalents a year.

“On top of the environmental impact, the cost to animals is enormous, 95 percent of the one billion chickens reared in the UK are bred in intensive factory farms.

“With alternatives this tasty, that doesn’t have to be the case.”

You can purchase the No Clucks Pizza via One Planet Pizza here for £6.15 including delivery

The post Vegan Fried Chick*n And Plant-Based Pizza Partnership Set To Save Chickens appeared first on Plant Based News.