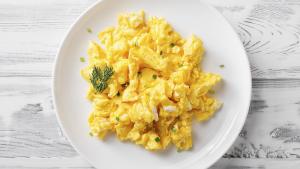 Japanese food tech Next Meats has successfully developed a vegan egg. The company says its plant-based option is better for the environment than animal-derived eggs.

Called Next Egg 1.0, the product will join Next Meats’ existing vegan range, which includes chicken and burgers as well as yakiniku and gyudon meat.

Next Egg 1.0 will launch through Japan’s B2B channels, whereby businesses will be able to purchase the it directly. Then it will become available to consumers in Japan and eventually offered in other countries, too.

The launch is especially significant given that Japan is the second-largest consumer of eggs worldwide, after Mexico.

Ryo Shirai is the CEO of Next Meats. Shirai says the company hopes its plant-based egg will raise awareness of the ‘issues that surround egg production‘.

In a press release, the company explained that ‘the environmental and ethical problems of the production process are not widely known by consumers in [Japan]’.

Vegan Eggs: Are They Healthy? And What Do They Taste Like?

According to the 2021 book Environmental Impact of Agro-Food Industry and Food Consumption, more than 70 million tonnes of eggs are produced every year.

Sustainability-focused website Green Eatz collected data from the Environmental Working Group’s Meat Eater’s Guide as well as the EPA’s Guide to Passenger Vehicle Emissions. It found that meat, cheese, and eggs have the highest carbon footprints compared to other foods.

The production of one kilo of eggs generates 4.83 kilograms of CO2 equivalent – the same as driving 11 miles.

Egg facilities generally produce more manure than the surrounding land can absorb. The manure contains nitrogen and phosphorous. When it enters groundwater or surface water supplies, it can contaminate drinking water and harm marine life.

Further, local communities living near to a chicken facility can develop respiratory problems. Hen houses often use industrial fans to blow air pollutants like ammonia, as well as fecal matter, out of the facility.

The post Vegan Egg Launches In Japan – The World’s Second Largest Consumer Of Eggs appeared first on Plant Based News.