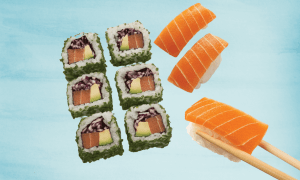 Wasabi, which has around 60 locations, announced the launch online.

“Another treat for summer… Our new vegan Zalmon is a tasty, plant-based alternative to one of our most popular sushi sets!?” the company wrote on social media.

“It looks and tastes so much like salmon, even we can’t believe it’s not!?”

The salmon comes in a vegan mini set. The set features plant-based Zalmon nigiri and uramaki rolls, as well as avocado, red cabbage, sweet chilli, and chives. It’s served with soy sauce and a wasabi sachet.

Earlier this month, new legislation effectively banned salmon farming in Argentina. Concerns about sustainability prompted the move, since salmon farming has been linked to antibiotic resistance and the spread of parasites.

Last month, salmon was linked to a COVID-19 outbreak in Beijing. A ‘national boycott’ of the fish followed the discovery.

And in 2019, reports emerged that salmon farming was to blame for ‘starving’ grizzly bears in Canada.

Wasabi’s new vegan Zalmon is available at all of its location, as well as on Deliveroo and Uber Eats.