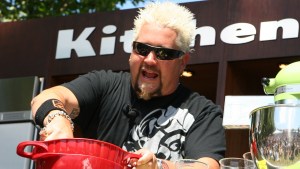 Emmy award-winning TV presenter and restaurateur Guy Fieri has given a $25,000 grant to a vegan food truck.

Avonte Hartsfield, owner of Rollin’ Roots, says he was ‘overwhelmed’ after finding out he was the recipient of the hefty grant.

In an interview with Kusi News, Hartsfield said the company doesn’t advertise its food as vegan as it’s for ‘everyone to enjoy’.

He added: “It’s really just comfort food that everyone can enjoy… Nobody can really tell it’s vegan…

“We’re just trying to provide good food – if people can just eat a little less meat then that’s our goal… But we’re just doing what we can to make [veganism] as accessible as possible.”

Hartsfield thanked Fieri on Instagram for the grant – stating the money will help the brand expand.

He captioned the post: “I had no idea I would be on the news so many times, especially since when I started this business I was sleeping in the office and my car just to keep it afloat!

“[I] can’t say enough about how thankful I am to see the support and watch how things are slowly coming together!”