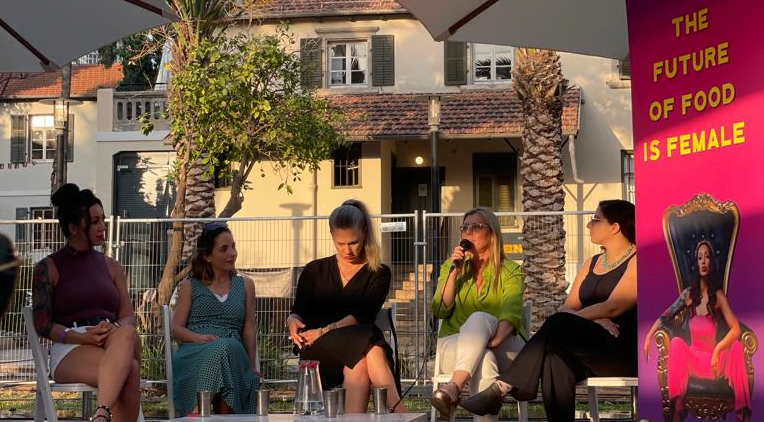 Israel’s 4th Vegan Fest, said to be the world’s largest vegan festival, welcomed over 100,000 attendees to Tel Aviv this week for three days of vegan cuisine and innovation.

The event — held at the Sarona complex in the city that has been called the “vegan capital of the world” — is taking place for the first time since 2019.

Festival attendees and industry professionals came together at the festival’s FoodTech area to discuss the latest innovations in vegan food technologies. The FoodTech area highlighted Israel’s strong food tech industry, with local companies representing tech ranging from 3D-printed steaks to milk made from cells to meat alternatives grown from mushrooms.

In the “Leading Women in FoodTech” panel on Tuesday, Dr. Hila Elimelech, co-founder and head of R&D at Israeli plant-based fish startup Plantish, told the crowd that 10 percent of Israel’s population is vegan.

Veganism is on the rise – in Israel and around the world – as people look for healthier and environmentally conscious ways to consume food. According to animal welfare organization Animal Matters, around 70 billion farm animals are reared each year for food – a rate that is unsustainable for the planet. The global vegan market is growing exponentially, with the plant-based market to reach $16.7 billion by 2026, according to Statista, a German company specializing in market and consumer data. Being vegan is no longer a niche trait but a lifestyle choice many choose to adopt.

“This is not a trend anymore, this is really becoming who we are. We are going to be different consumers. I’m not saying everyone in the future will be vegan or vegetarian. What I am saying is that the future of food will look different and will offer different people different choices of healthy and plant-based products,” InnovoPro CEO Taly Nechushtan tells NoCamels. Nechustan appeared with Dr. Elimelech and others in the “Leading Women in FoodTech” panel.

Vegan Fest has grown significantly since its first gathering in 2013, which welcomed around 5,000 attendees. This year’s event – in collaboration with the Tel Aviv Municipality – hosted several top Israeli innovators in the realm of vegan food tech. In a series of panels – including ones titled “Failures and Successes – The Challenges in the World of Entrepreneurship” and “The Future of Food” – the festival aimed to spotlight the work of Israeli companies crafting more sustainable meat and protein alternatives.

“We really believe that the vegan food tech companies have a crucial role in the vegan revolution. So, we want to promote that as much as possible because we are big believers in the technology,” Paz adds.

In light of the festival, NoCamels spotlights 5 Israeli companies participating in Vegan Fest that are transforming the world of food tech through innovative vegan products.

At a time in which the unsustainable demand for seafood is at an all-time high, vegan food tech company Plantish is reinventing the way that consumers eat fish. Working to create fish and seafood analogs derived from plants, Plantish is providing the complete experience of fish dishes for those seeking to minimize their environmental impact. Their first product, a whole-cut vegan salmon fillet, was launched in January. The innovative ‘fish’ product places a premium on a normal – and delicious – salmon experience without the negative toll on the ocean.

“We are making cultured meat, we are making texture and flavor which look like, smell like, and feel like fish without hurting a single animal. This is something which is super exciting every day,” says Dr. Elimelech at the “Leading Women in FoodTech” panel Tuesday.

Founded by the team of Dr. Elimelich, Dr. Ofek Ron, Dr. Ron Sicsic, and Dr. Arial Szklanny, the Plantish company is working to lessen human impact on the oceans – especially during a period in which ocean acidification is on an exponential rise.

Using the festival as a platform for vegan food tech innovation and collaboration, Dr. Elimelech says she and the Plantish team are hoping to continue to change the way that all people consume fish.

The company will ride on the growth of the vegan seafood industry and aims to launch its product in restaurants throughout Israel by 2024.

Founded by Dr. Ascher Shmulewitz in 2013, InnovoPro aims to launch the “chickpea revolution” through innovative chickpea-based protein products that are sold to food production companies worldwide.

With a research and development team devoted to extracting protein out of chickpeas – a protein known in the vegan community as a super-food legume – InnovoPro is committed to offering companies ingredients for clean-label vegan products. Their chickpea protein products are neutral in taste and texture with strong emulsification properties so they can be added to a wide range of food products. Currently, the team is focusing on three pillars: the company’s platform, global reach, and a sustainable supply chain.

“We believe that the more people will be involved in reducing our impact, we can do a good service for the next generation,” InnovoPro CEO Taly Nechushtan tells NoCamels.

More than providing healthy chickpea-based protein ingredients, InnovoPro is looking to minimize the human footprint on the planet. Their sustainability efforts, coupled with their innovative approach to protein harvesting, make InnovoPro a game-changer in the realm of vegan food tech.

InnovoPro is looking to add new products to their chickpea platform, including a texturized protein for meat-analog formulators and an egg-white replacement for bakers. It is only through high-tech innovation that the use of vegan ingredients will continue to rise, Nechushtan explains.

Israeli food tech company Kinoko Tech is working to produce the next generation of protein-rich food through fungi and fermentation technologies. At Hebrew University, the Kinoko team discovered a way to grow mushrooms into meat alternatives. Their natural fermentation process produces a product that has a meat-like taste and texture with high nutritional value.

The company was founded in 2019 by three women: Dr. Jasmin Ravid, Dr. Daria Feldman, and Hadar Shohat. The women’s joint background in nutritional sciences, microbiology, and food technology has led Kinoko to be a game-changer in the vegan startup world.

Their products – more than provide consumers with tasty protein alternatives – are both plant- and climate-friendly. The company aims to take strides in sustainable foods to minimize environmental impact and the burden of the modern inefficient food system.

“I see huge challenges ahead of us with the huge system, but I am very excited about the amount of people and talent and money that is now going into finding a solution for this problem. We are not looking away anymore, we are looking straight into the problems and trying to solve them. And that excites me,” said Kinoko co-founder Jasmin Ravid in a Vegan Fest panel.

Remilk is working to create real dairy without the need for cows through microbial fermentation. Their product invites consumers to rethink their notion of dairy by creating identical milk products without a negative environmental impact.

Remilk’s innovation stems from milk proteins, which they copy and insert into yeast. The result? Real milk proteins that, when combined with vitamins, minerals, and non-animal fat and sugar, develop into authentic dairy products.

The company is not only providing an environmentally-conscious alternative to cow-based dairy, but it is also creating a healthier product for consumers. With milk products deriving from fermentation and not cows, Remilk provides consumers with a cholesterol-, lactose-, hormone-, and antibiotic-free product – all while being 100% cruelty-free.

The company, founded in 2019 by Aviv Wolff and Ori Cohavi, raised $120 million this year to further its real dairy protein production on a larger scale. Planning to launch the world’s largest full-scale precision fermentation facility in Denmark, Remilk will continue to innovate and produce real dairy in labs, not farms.

MeaTech, an international deep tech food company working in the field of cultured meat, was a Vegan Fest sponsor and participant. The company’s CTO, Dan Kozlovski, was a featured panelist on “The Future of Food” panel on Tuesday, while Business Development Manager Yair Ayalon gave a lecture on Wednesday and Biologist Dana Hillel gave a lecture on MeaTech’s cultured meat development process on Thursday.

The company aims to create high-quality real meat products that are both safe and slaughter-free through high-technology science. They aimed to showcase their products and partake in the vegan food innovation scene at the recent Vegan Fest.

“Vegan Fest is a unique opportunity for MeaTech and other Israeli food-tech and alternative protein startups to engage the vegan community with a shared vision of transforming food sourcing and systems to address issues such as animal welfare, the restoration of ecosystems, and global food security,” said Arik Kaufman, MeaTech’s CEO said in a statement ahead of the event.