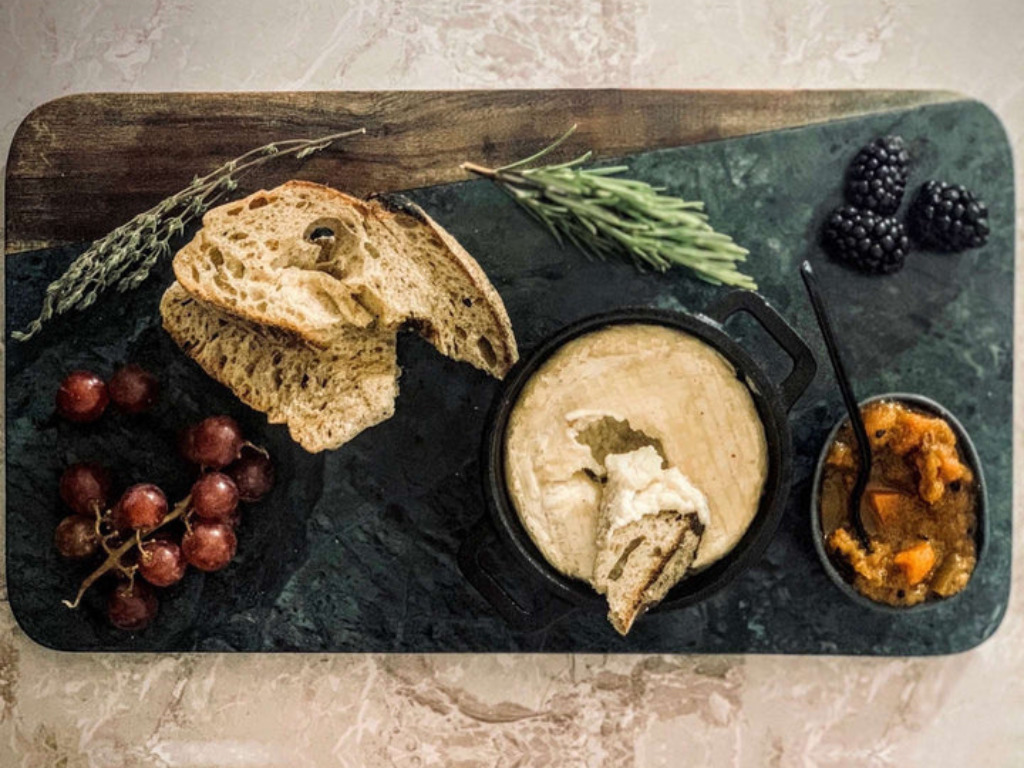 La Fauxmagerie, Britain’s first vegan cheesemonger has announced it has developed a range for supermarket distribution. The range represents a step back from the more artisanal recipes that the London-based cheese startup offers. Waitrose has been confirmed as the exclusive distribution partner for the new line, which includes ‘Shoreditch Smoked’, ‘Brixton Blue’ and ‘Truffle Camemvert’.

Initially, 20 select Waitrose stores are stocking the range with a nationwide rollout expected to gain traction shortly. La Fauxmagerie’s cheeses have been developed using traditional cheesemaking techniques in a bid to create authentic cheese without the dairy.

Vegan cheese but not as we know it

La Fauxmagerie has been developing artisanal cheeses for four years. The new supermarket range represents a shift in consumer buying habits and priorities, as well as mainstream adoption of plant-based diets.

“We’ve spent years crafting and championing delicious, high-quality dairy-free cheeses.” Rachel and Charlotte Stevens, founders of La Fauxmageire said in a statement. “We are ecstatic that our range of cheeses are now on the shelves at Waitrose, providing authentic dairy alternatives using traditional methods, but modern ingredients!”

Waitrose has acknowledged that it is not just vegan shoppers that have shown interest in the new cheeses. The supermarket chain has revealed that a variety of demographics are heading to the vegan aisle to see what dairy alternatives are about. La Fauxmagerie’s range is expected to be a draw for curious consumers.

“We are delighted to bring artisanal vegan cheese brand, La Fauxmagerie to our shelves,” Sarah Miness, Waitrose’s cheese buyer told Vegan Food & Living. “The time, care and attention which is taken by the producers to create these great-tasting alternatives is simply extraordinary and the final product is absolutely delicious.”

Dairy is the final stumbling block

Vegan dairy has long had a reputation for being somewhat lacklustre. Milk options that split in hot drinks are a thing of the past but cheese has remained a hurdle. In 2019 it was revealed that 45 percent of UK citizens would like to go vegan, but couldn’t because they would struggle to give up cheese. The data came from a poll carried out by plant-based dairy company Violife and was shared with Plant Based News. The poll also revealed a general lack of knowledge about vegan cheese, with 24 percent of respondents not knowing that melting vegan cheese existed.

The quest for authentic dairy alternatives has seen vegan cheesemongers get in hot water with conventional producers. The latter have frequently taken umbrage at dairy-related terms being used on animal-free product packaging. Arguably the most infamous case was that of Miyoko’s Creamery, in 2021. The vegan dairy manufacturer wons its first amendment case, against the State of California, thus retaining the right to use terms such as “butter” and “lactose-free”.

The changing landscape of vegan cheese

In a bid to make animal-free cheese that tastes good enough to sway conventional dairy fans, producers are experimenting with increasingly innovative methodologies and ingredients.

In November, Singapore-based Sophie’s BioNutrients, working with the U.S.’s Ingredion, created melting cheese using microalgae. The food is cited as being tangy, like regular cheese, while packing a B12 punch as well. The microalgae are grown in bioreactors before being harvested and converted into a high-protein sustainable flour. So far, it has been used to create two cheese varieties: semi-hard cheddar and a spread.

U.S.-based Vertage uses what it calls a “combination of traditional techniques and fresh science” to create its vegan cheeses. The startup uses cashew, soy, oat or almond bases which are fermented to capture a specific flavour note. Mycelium fermentation and microbial bio-design have both been cited as being used to produce sustainable alternative dairy that rivals its counterpart in terms of taste and nutrition.

Precision fermentation has become a focus for many vegan cheesemakers. California’s Perfect Day has secured itself a position as a leading supplier of cow-free dairy proteins, for use in realistic cheese analogues. In October last year, it was revealed at Modern Kitchen’s partner, helping it to create the world’s first animal-free cream cheese made using real dairy proteins.