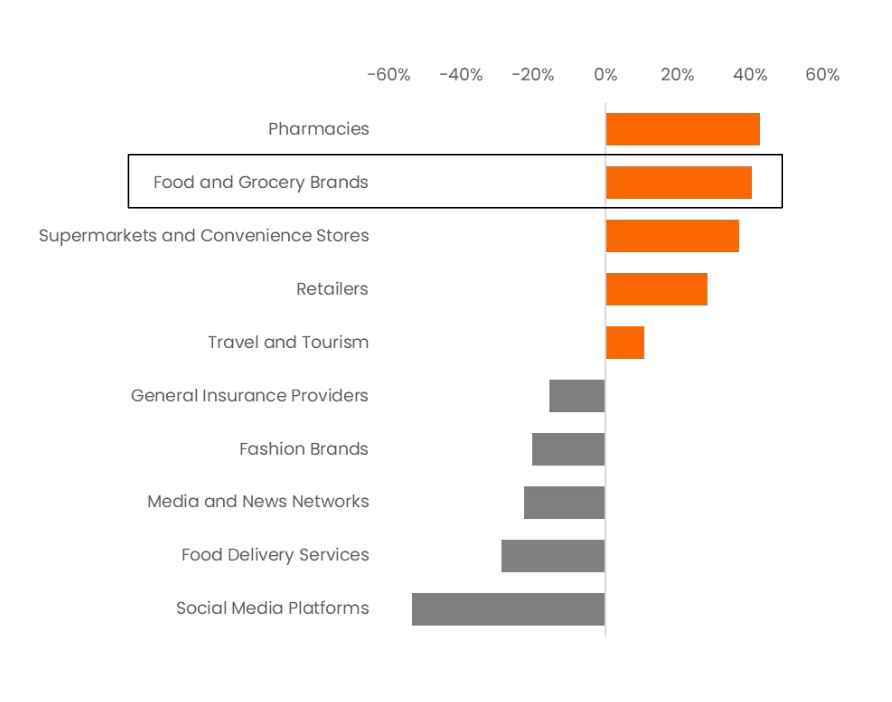 The food and grocery (F&G) industry is deemed to be one of the leading industries when it comes to upholding social and environmental responsibility.

Consistent with previous Glow research, Social Media Platforms come last and are viewed as the most socially irresponsible industry by Australian consumers.

Glow’s research indicates that the food and grocery industry is seen to be leading the way in championing ESG commitments.

Consumers in Australia now have big expectations that F&G businesses support people and the planet, and not solely focus on profits.

And they have an opinion about how well companies are doing in this space.

Here’s Top 20 of the most socially and environmentally responsible F&G brands according to Aussies:

The top ranked brand according to Glow’s survey is Who Gives A Crap, the maker of super soft 100% recycled toilet paper that donates 50% of its profits to build toilets in the developing world.

Who Gives A Crap is a B Corp company that was launched in 2012 by Simon Griffiths, Danny Alexander and Jehan Ratnatunga.

Apart from toilet paper, the company has just launched a new hair and body care product range under a new brand, Good Time.

The Good Time range is made of products free from plastic, have ingredients not tested on animals, and are transported via ‘carbon-neutral ships’.

The ever increasingly popular Beyond Meat is on number 3 on the list.

Founded in 2009 by Ethan Brown, Beyond Meat is a Los Angeles–based producer of plant-based meat substitutes.

The $3bn private company uses a variety of non-GMO plant proteins including pea, brown rice, mung bean and faba bean, which are combined to give the appearance of meat.

v2food, which comes in at number 5 on Glow’s list, is Australia’s answer to Beyond Meat.

v2food was launched in 2018 out of the CSIRO’s Innovation Fund. It has some “fake meat” products but also a unique process which makes its products easier to produce.

According to v2food’s CEO and founder Nick Hazell, alternative proteins are at an early stage in Australia, but consumer uptake is growing rapidly.

“We’re continuing to grow month on month, and are attracting an increasing consumer base across major and independent supermarkets,” Hazell told Stockhead previously.

v2food products do not contain GMOs or any artificial colours or flavourings, and this makes it an ideal product for the European and Chinese markets, where the many large competitors have been unable to enter the market due to strict regulations.

The closest to a “fake meat” ASX stock is poultry company Inghams (ASX:ING), which is delving into nuggets among other plant-based proteins.

Another is Maggie Beer Holdings (ASX:MBH), which sells a variety of plant-based food products including creamy coconut curry, eggplant and cannellini bean caponata, along with “Boston Style” smokey beans.

Freedom Foods, which is at number 4 on Glow’s list, is an ex ASX-lister that has disrupted the gluten free food industry, having launched a number of low gluten range of oats and biscuits,

The company was acquired by The Arnott’s Group last year, and has delisted itself from the ASX.

The good old favourite Vegemite sits at number 13 on the Glow list.

The Vegemite brand is owned by ASX-listed Bega Cheese (ASX:BGA) which has recently announced its commitment to two core areas: farm sustainability and factory sustainability.

Bega Cheese also said that it has identified greenhouse gas emissions (GHG) reduction targets for the company, including a net zero emissions target by 2050.

So who drives these perceptions?

According to Glow, an analysis of brand level scores shows that Gen Z are more sceptical and Millennials slightly more positive on brands than adults overall.

Gen Z’s scepticism is evident – they score brands on average 15% lower than the other groups and are the least positive about the leading brands.

Millennials, in contrast, rate the laggards most positively.

Along with males, these younger generations demonstrate the least difference between scores for leaders and laggards.

This difference likely reflects their passion, but in general both generations have very high expectations of brands to act responsibly.

The survey also revealed that consumers don’t necessarily need to have used the product to know what those brands stand for.

Stockhead reached out to Mike Johnston, who is the Managing Director of Data Products at Glow.

What would be the main takeaway from Glow’s survey with regards to ESG?

“The report provides clear evidence of the importance of ESG concerns to consumers, and therefore how this impacts brands with consumers increasingly spending on brands that align with their social and environmental values,” Johnston told Stockhead.

“The report also highlights key commercial benefits of being a leading brand in this area.

“This includes securing a bigger share of sustainable switchers, especially younger consumers, and how they are growing revenue faster than the brands that consumers feel are lagging.”

How do Aussie F&G brands compare to overseas brands when it comes to ESG?

“I think that’s a difficult comparison to make unilaterally because different F&G categories and businesses will have different ESG issues to address based on how they manufacture, distribute and market their products,” Johnston said.

“What is clear is that the businesses that really believe in doing better are putting ESG considerations at their core, and that is helping them differentiate and win.

“We can see plenty of evidence of that from both overseas brands as well as local businesses.

“For example, big brands like Mondelez’s Cadbury have strong global ESG initiatives like their Cocoa Life sustainable sourcing program, but they also do lots of work within communities in Australia.

“This combination is a winner amongst Aussie consumers.

“Similarly, yoghurt brand Chobani has purpose in its DNA driven by its global founder, but the Aussie business is adding its own innovation with initiatives like the ‘Fruit for Good’ product that donates all profits to Foodbank to help overcome food scarcity.”

Which Aussie food and grocery brands are emerging as leaders?

“Whilst they have many initiatives addressing environmental impact through their ‘Together to Zero’ strategy and people equivalent ‘Better Together’,  it is their focus on reducing plastic usage and waste that has elevated them to be recognised as one of Australia’s most sustainable retailers.

“The most exciting bit is the number of emerging Australian brands that are succeeding by offering great products with really clear environmental and social benefits.

“For example, v2food who offer plant-based meat alternatives that are good for you and the planet, or toilet paper brand Who Gives A Crap whose authentic social purpose is supported by strong environmental credentials.”

How will ESG play a role in consumers’ food and grocery choices in the future?

“There are a number of research studies that show the same trend as Glow’s data – consumers increasingly choosing brands they think are doing better for people and the planet,” Johnston said.

“And this is particularly the case for Gen Z who are both more sceptical of brands and more committed to making positive choices.

“That said, it is fair to say that right now the majority of consumers, even amongst Gen Z, will not switch brands based purely on perceptions of a brand’s ESG credentials.

“The dominant decision drivers remain with things like usefulness, convenience, quality and value.

“But more than ever, people are expecting these things without companies harming the planet, human beings or our communities.

“And if those needs aren’t met, then they are switching brands to get it all.

“So as consumers continue to expect more, business success will depend on ‘doing the right thing’ – the only choice is whether to lead or follow.”

The post The Ethical Investor: The Aussie food brands with the best ESG credentials, as revealed by Glow’s survey appeared first on Stockhead.