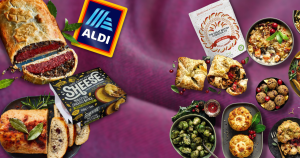 It’s time to warm up your cockles and dust off your decorations, for the Christmas season is here. For many of us, this year is extra special as it may be the first time in a long time that we can gather with loved ones at this festive time. And how better to do that than with all the best vegan Christmas food?

However you celebrate, Christmas for many of us is centralized around food. And for 2021, the festive vegan options are some of the best we’ve seen yet.

Among the belters on offer is a soy-based No Turkey Crown complete with a cranberry and chestnut stuffing, wrapped in vegan bacon.

This is part of the Plant Menu range, including Vegan Gravy, No Pigs In Blankets, and a butternut squash and rosemary Vegan Festive Wreath.

There are goodies for the sweet tooths out there too, including a Vegan Cheezecake, and Specially Selected Chocolate Tort Slices.

Customers can shop the products from December 19.

Marks & Spencer has announced its largest vegan Christmas food range to date. It comes, the retailer says, as more consumers are looking for sustainable and flexitarian options.

Moreover, the range includes more than 25 brand new dishes. It includes Plant Kitchen’s Vegan Duck Croquettes, made with shredded soya and a cherry hoisin sauce. Additionally, there are Mini Battered No Fishcakes, Mini No Chicken Kievs, and No Pork BBQ Bon Bons.

At £25, the retailer is also selling a Vegan Selection Box. This includes “all the trimmings you need for your vegan Christmas dinner,” such as triple cooked potatoes, vegan pigs in blankets, a leek bake, and apple and cranberry stuffing balls.

From December 1, the new pea-based Plant Kitchen Vegan Turkey Rolled Roast will be in store, with other options reaching supermarket shelves on December 18.

The box is currently available in Sainsbury’s and Tesco at £5.00.

Elsewhere in the lands of vegan cheese, Sheese is bringing its answer to dairy-free camembert with its new Sheese Melting Sheesey Bake with Spring Onion & Garlic.

New this year, the 150g dish can be put in the oven and served as a magic dip for whatever bread you like. They can also be used as a pasta sauce, with an added liquid.

The bakes are currently available in Waitrose, Sainsbury’s, Ocaco’s, and specialist retailers.

With multiple release dates, Morrisons is drip-feeding us some tantalizing vegan treats this year.

For mains, the range includes a Vegan Roast Joint with Herb and Onion Stuffing, and a Vegan Vegetable Wellington.

Lots of the vegan canapes, such as a new recipe of its No Duck Spring Rolls, as well as Beetroot and Hazelnut Bites, are already available in-store and online.

Other vegan Christmas food goods will be revealed in December, with some as late as December 21 – though Morrisons is yet to confirm an exact date on all products.

It features a Quorn filling, flakey vegan pastry, stuffing balls, and a vegan bacon crumb. And it’s all topped up with a sage and cranberry sauce!

The snack launched on November 22 nationwide, where it’s available at £1.60.

For the mighty Greggs fans out there, you can even get yourself a Christmas-themed jumper. The product is available from notjustclothing for £34.99.

7. Christmas dinner? I want mine on a pizza.

Vegan pizza company, One Planet Pizza has dared to go where few have gone before. It’s combined a nut roast with a pizza, in partnership with plant-based pioneer, THIS.

The base features potato chunks, brussel sprouts, THIS Isn’t Bacon lardons, THIS Isn’t Stuffing, THIS Isn’t Pork Cocktail Sausages and cranberry sauce. Additionally, it comes served with a side of gravy.

THIS co-founder Andy Shovel said: “THIS is the pizza you never knew you needed. Our hyper-realistic sausages, lardons, and stuffing combined with One Planet Pizza’s signature dough and family recipe sauce tastes lush.”

You can shop the creation online here for £3.99

And that’s because with every bar sold, the company donates 50p to charity partners in Ecuador.

Here, Fundación Jocotoco is part of reforesting works, right by the source of Ombar’s cacao.

You can buy it as part of a case of ten, or a bundle of six via Ombar’s website here

Available from December 17, you can order a two-person box containing three meals for £36.69. Alternatively, there are larger boxes available ranging in price from £48.69 to £79.19.

You can find out more about Green Chef here

10.You can even make your porridge Christmassy this year

It’s not all about the Christmas dinner or chocolate boxes. The Great British Porridge Co. understands this, and thus, has brought out a new festive flavor.

The company’s Apple & Cinnamon is limited edition, dubbed to “get you in the mood for Christmas.”

Moreover, it is made from natural ingredients, with a good source of fiber, and contains no added sugar.

You can shop the flavor online here

The post The Best UK Vegan Christmas Food Launches And When You Can Get Them appeared first on Plant Based News.