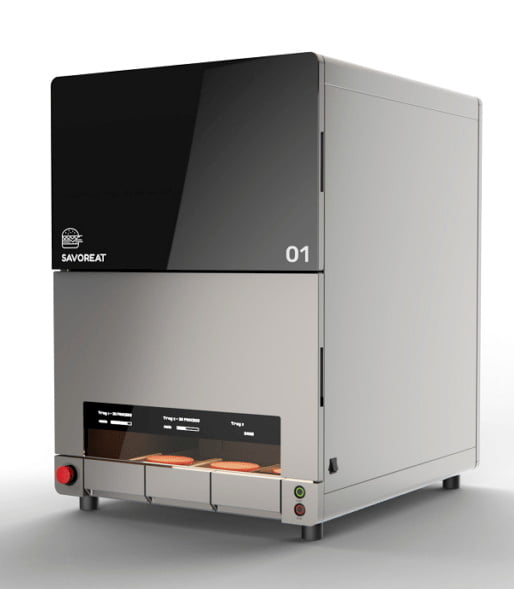 A robot chef takes orders by #smartphone and grills meatless burgers to perfection in under four minutes. The future of fast food is already here, says Racheli Vizman. Her company, SavorEat, has taken a step beyond simply developing plant-based burgers that taste like meat. They’re shaking up the food industry with what she calls an end-to-end technology platform for the food industry. They manufacture the burger mix, they package it in specially designed cartridges and they deliver it to their robot chef at restaurants and burger bars. The customer then places their order by smartphone. They scan a QR code, decide what they want and how they want it cooked, and the smart robot 3D-prints their burger and grills it to order. The only human intervention comes when staff put it inside a bun, add lettuce, tomato, pickles and other trimmings and serve it to the diner. “We are not just developing a meat alternative solution, we are basically changing the game with a smart robot that grills the burger and allows the end consumer to personalize their food,” Vizman, Co-founder and CEO of the Rehovot-based company, tells NoCamels. The robot chefs are already being trialled at some of BBB’s 100 burger outlets in Israel, and Vizman says that by the end of the year they’ll be rolled to US universities in a deal with Sodexo, the food services and facilities management company. The SavorEat process starts with manufacture of the various burger mixes – hamburger, chicken, turkey, even pork and seafood, all entirely plant-based, and all certified as kosher. They’re also vegan, gluten-free, soya-free and allergen-free. Cartridges of mix are loaded into the robot chef, which responds to customer’s requests by shaping and grilling their burger, typically in three-and-a-half minutes. “Different cartridges give you different products, like steak or chicken breast. It’s the same as Nespresso that you are probably familiar with, where there are different colors for different coffee pods,” says Vizman. The plant-based burgers are made of pea, and chickpea proteins and other ingredients bound together with a cellulose fiber so that they look, taste and smell like real meat, have the same texture and the same sizzle. The taste can be adjusted to meet the individual requirements of a particular chain of restaurants. And the consumer also has a say in how their burger is cooked. The app asks how hungry they are, whether they want more fat or more protein and whether they prefer it juicy or well-done. The robot doesn’t just grill though, it provides vital data on what customers want. If turkey burgers are outselling breakfast sausages, it will feed that information back in real time so the company can respond accordingly. “We developed the different formulations of taste and flavor, and the robot and algorithm that is the brains behind everything. This robot doesn’t just manufacture food, it also manufactures a lot of data,” says Vizman. “We have specialists in food science, plant molecular biology, mechanical engineering, biochemistry and business, all sitting together, all working together as a group.” Vizman hit on the idea of a robot chef eight years ago when she suffered what she describes as a “very severe medical episode” that left her unable to eat fat and surviving on a diet of little more than broccoli. “I remember dreaming about a machine that would allow me to push a few buttons, and make me food exactly as I wanted it,” she says. “I guessed somebody must have invented it already.” “I checked on Google and I found that everyone was talking about 3D-printing and digital manufacturing but none of it was related to food. I studied the food tech industry before the boom and I decided I would make the switch.” She hooked up with two experts from the Hebrew University’s Yissum Research Development Company – Prof. Oded Shoseyov (SavorEat’s Co-founder and chief scientific officer) and Prof. Ido Braslevsky (Co-founder and scientific advisor). They jointly established the company in December 2018. It raised $4.75 million then went public on the Tel Aviv Stock Exchange in November 2020, raising $13 million. The post The AI Robot Chef That Grills Your Meat-Free Burger appeared first on NoCamels. plant-based savoreat meat alternative meat chicken seafood pork bars burgers burger protein alternative industry