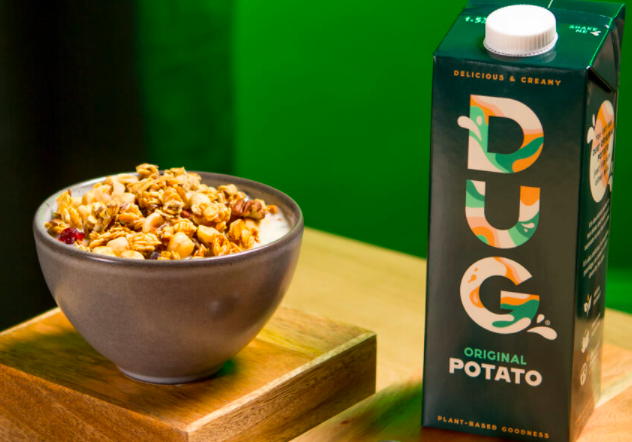 Food technology has definitely emerged as an important tool to feed a growing population while using less resources and rethinking how we produce food by nontraditional means. Depending on one’s definition of food tech, we can include plant-based proteins, cell-based (or “lab-grown”) meat and treats derived from molecular technology such as chocolate and coffee.

Bottom line, the list of next-gen foods is growing, and also evolving far beyond the fake burgers provided by the likes of Impossible Foods and Beyond Meat. The list of new, up-and-coming food tech companies is definitely exhaustive; we highlight a few compelling ones here.

It may sound like something from Star Trek or an SNL skit gone wrong, but yes, a 3D printer for making beverages should be on your food technology bingo cards. The brains behind Cana understand that something has to be done about the billions of cans and bottles that end up in landfills instead of being recycled. Add the fact that massive amounts of water itself is needed to support our affinity for water-based drinks and well, you get the picture.

As Matt Mahar, Cana’s CEO, reminds us, most beverages are about 90 percent water. Tally up the emissions generated from hauling around heavy loads of what is basically water and not much else, we’ve got a massive sustainability challenge on our hands.

Stay tuned on what could become the Hulu or Netflix of drinks. So far, Cana has received at least $30 million from The Production Board (TPB) to develop the startup’s hardware and chemistry systems.

"Dug in" for some potato milk

The vast majority of us love potatoes in any form; and there are many amongst us that wish we didn’t crave them so much. That is, if the potatoes are baked, fried or deep-fried; if you’ve ever bitten into a raw potato, you know that the sad result is a bitter, cotton-mouthed feeling. Which leads to this question: Could it work as a milk alternative?

The crew at Dug believes so.

Available online in the U.K. and soon at the British grocer Waitrose, potato-based Dug beverages come with a bevy of health claims – it’s low-glycemic, is rich in antioxidants and holds its own on the nutrients front. Plus, Dug says cultivating potatoes is a more sustainable way to produce milk alternatives, with claims that spuds are far more land-efficient, require far less water than almonds and has much less impact on the climate than dairy-based milk.

As with other milk alternatives, the star of the show is actually a small part of the product’s ingredient list. After water, potatoes comprise 6 percent of Dug’s beverage; other ingredients include pea protein, chicory fiber and canola oil.

A food tech take on the poke bowl

Just as the meat and dairy sectors have their huge impact on land, fishing has done its own number on the oceans. In recent years, more plant- and cell-based alternatives to seafoods have been appearing on the market. Some have done quite well and scored rave reviews from vegans and foodies (to be clear, we know they can be one and the same) alike. Others, well, they ended up at your local grocery store outlet for a reason.

The startup Current Foods (formerly known as Kuleana), boasts versions of tuna and salmon. The ingredients that have allowed Current Foods to give conventional sushi a run for its money include algae, peas, bamboo and potato. According to VegNews, the reformulated tuna and salmon are only for sale at retailers Southern California and for meal orders in a few restaurants, but are available to order online.

One challenge food tech companies face is that while many plant-based foods are far better than they were a decade ago, plenty of consumers will always want the real thing. That reality is especially true when it comes to dairy milk; sure, plant-based alternatives like Not Milk definitely hold their own, but a large segment of society still wants milk with the “moo” in it.

TurtleTree is one such company making a splash in what is now a very niche yet growing space. With labs in the U.S. and Singapore, the company is on a path to develop milk products that are based on cells from bovine mammary glands – without the land, emissions and animal welfare concerns. Investors are taking notice; TurtleTree raised $30 million in a round of funding last fall.

The voyage toward cacao-free chocolate and bean-free coffee

The evidence suggests climate change is already having an impact on foods that we consider treats or as a luxury, as in chocolate; or, beverages necessary to start our day, as in coffee. One alternative is to create such foods using molecular technology, with food tech pioneer Atomo Coffee serving as one example.

Voyage Foods is on a path to reinvent one of our favorite indulgences – chocolate and peanut butter together in any form, as well as the cup of Joe (together or separate). Yes, that means cacao-free chocolate, bean-free coffee and peanut butter free of both allergens and peanuts.

In a recent profile on Fast Company, the company’s founder, Adam Maxwell, described Voyage Foods’ peanut butter as one based on ingredients such as sunflower seeds, buckwheat and quinoa, while grape seeds are among the components within its chocolate alternative.

An upside to overfished lobster?

No word quite yet on when a cell-based lobster roll will appear on menus anytime soon. For now, Upside Foods has confirmed that the team at the former Cultured Decadence will continue its work as planned, with the Wisconsin site serving as the company’s Midwestern hub.

In case you’ve fallen behind on your reading, Upside Foods used to be known as Memphis Meats, which before its rebranding was known as the first lab-based meat producer on the planet, and a year later, rolled out the globe’s first cell-based meatball.

A lobster roll made possible without a creature being boiled alive in its shell? Stay tuned, food tech will allow this to happen soon.