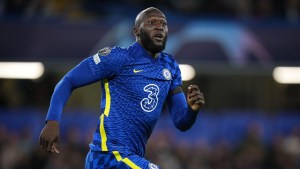 Professional footballer and Chelsea striker Romelu Lukaku has encouraged his 8.3 million Instagram followers to eat plant-based. The 28-year-old, who also plays for Belgian’s national team, the Belgian Red Devils, is now a backer of vegan giant, Beyond Meat.

He also becomes the first European ambassador for the brand.

The footballer shared a promotional video on his Instagram today.

“Diet is a big part of my daily life. And over time I’ve really understood how eating more plant-based food, like Beyond Meat, can seamlessly fit within my routine,” he said in a statement.

The video features Lukaku enjoying the British classic, bangers and mash, in a Chelsea pub. Only, the traditional dish is made with Beyond Meat’s Beyond Sausage instead.

Alongside the video, he adds: “I discovered that food can completely change my training performance and mindset… since changing my eating habits, I’ve noticed such a difference.”

Now, Lukaku is among a string of athletes championing the brand, such as Lewis Hamilton, Nick Kyrgios, Chris Paul, Kyrie Irving, and Lindsey Vonn.

According to Beyond Meat’s chief brand officer, Beth Moskowitz, he was chosen because he embodies its mission.

And, because he “exemplifies how athletes at the highest caliber are choosing to include plant-based protein in their diets for its nutritional benefits.”

Moskowitz adds: “At Beyond Meat, we are proud to partner with top athletes to inspire consumers to make small changes that can add up to create a positive impact for the planet.”

While Lukaku has publicly advocated a vegan brand, he doesn’t label himself as one.

However, he is “doing what he can” to incorporate more plant-based foods into his diet.

This is according to Joe, who he also told: “I think a lot of players are incorporating more plant-based meals as they help us achieve a more balanced lifestyle.”

“I think this is an opportunity to help people see an alternative to meat and maybe change their diet. You don’t have to be vegan or vegetarian to go beyond meat,” he added.

The post Romelu Lukaku Backs Beyond Meat: ‘I’ve Noticed Such A Difference’ appeared first on Plant Based News.