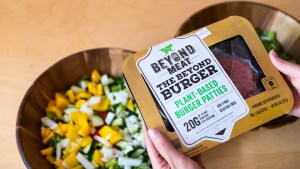 The vegan food market is set to face challenges after a drought in Canada severely impacted pea crop yield. Many plant-based companies, including Beyond Meat and Meatless Farm, rely on pea protein to create their products.

Over the summer, Canada – the largest pea-producing region in the world – saw its worst drought in more than a century. The drought covered more than 90 percent of agricultural land in western Canada and affected 45.9 million acres of cropland.

This resulted in a 45 percent drop in pea production, according to plant-based ingredient producer Roquette. Subsequently, pea prices increased by 120 percent compared to last year.

Roquette – which has invested more than half a billion euros in pea protein over a period of five years – said climbing costs would ‘inevitably’ be transferred to customers.

“The plant protein sector is facing an unprecedented situation that is strongly impacting the market: tight raw material supply capacity while the global demand for plant proteins is growing significantly, driven by a strong consumer demand for healthier nutrition and sustainable food,” Roquette commented.

The rise of pea protein

Peas are increasingly cropping up on the ingredient lists of vegan meat and dairy – and have been doing so for years.

In 2018, more than 750 new pea-related foods reached store shelves, according to Mintel.

Jeremy Burks is the Senior Vice President of Plant Proteins at Roquette. Burks said in a statement: “We know our customers are watching the raw material prices and availability closely and they can rely on our huge investments to shorten the supply chains and help them mitigate some of this significant cost increase.”

He later added: “The short term is a serious challenge, but we are making certain that customers can look forward with confidence.”

The post Record-Breaking Drought Could Lead To Rise In Vegan Meat Prices appeared first on Plant Based News.