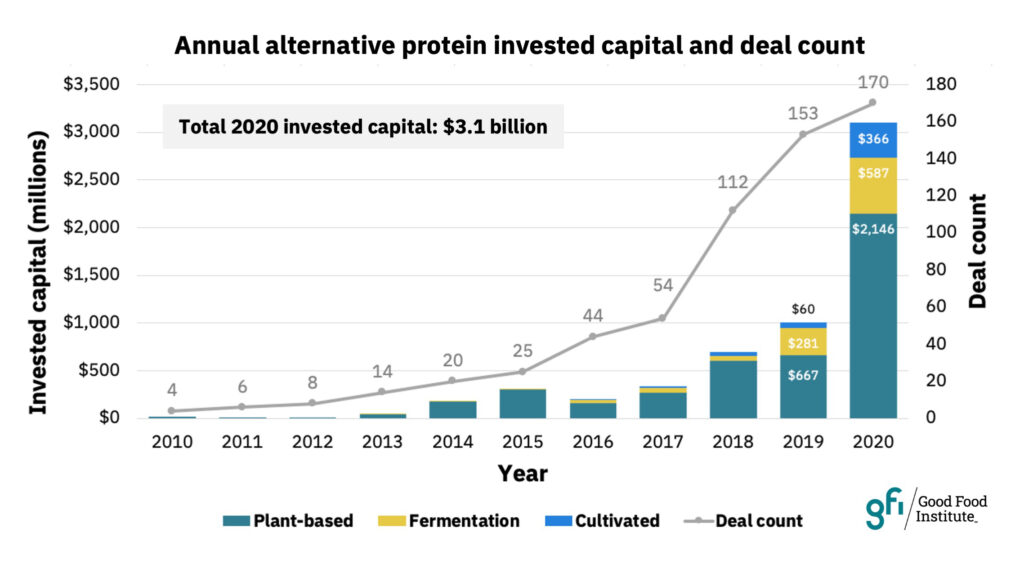 The alternative protein industry raised $3.1 billion in investments in 2020—three times more than in any single year in the industry’s history. The same year that saw multiple social, environmental, and economic crises converge across the globe also saw record-breaking investments in alt proteins, which, not coincidentally, provide solutions to some of our most serious challenges—from climate change to global hunger. As the world sets its sights on a post-pandemic horizon and the global goal of net-zero emissions, investors are quickly realizing that climate risk is investment risk, making sustainable solutions for protein production attractive for reasons that extend far beyond the bottom line.

Record-breaking investments in an extraordinary year of challenges

We’ve written about the events of 2020, from the early days of the Covid-19 pandemic when we shared resources to help the industry navigate the new challenges to our reporting of plant-based sales surges and our 2020 highlight reel of major wins for alternative proteins.

Now, new data released this month by The Good Food Institute (GFI) reveals that 2020 saw a stunning $3.1 billion in investments in companies creating sustainable alternatives to conventional animal-based foods, including plant-based meat, egg, and dairy companies; cultivated meat companies; and fermentation companies devoted to alternative proteins. This record surge in capital investment was three times more than what was raised in 2019 and 4.5 times more than 2018. Of the $5.9 billion raised by alternative protein companies over the past decade, more than half was received in 2020 alone.

“Over the past year, the alternative protein industry has demonstrated not only resilience but acceleration, raising significantly more investment capital in 2020 than in prior years,” says GFI director of corporate engagement Caroline Bushnell. “These capital infusions and the funding still to come will facilitate much-needed R&D and capacity building to enable these companies to scale and reach more consumers with delicious, affordable, and accessible alternative protein products.”

GFI’s analysis of alternative protein investment activity in 2020 was conducted using the PitchBook Data platform and breaks down data in the industry’s three major pillars:

Plant-based meat, egg, and dairy companies received $2.1 billion in investments in 2020—the most capital raised in any single year in the industry’s history and more than three times the $667 million raised in 2019. These companies have raised $4.4 billion in investments in the past decade (2010–2020). Almost half, or $2.1 billion, was raised in 2020 alone. This included Impossible Foods’ record $700 million funding haul, which comprised a $500 million Series F in March and a $200 million Series G in August; LIVEKINDLY’s $335 million venture capital financing; Oatly’s $200 million private equity and $78 million debt financing; and Califia Farms’ $172 million private equity financing.

Cultivated meat companies received more than $360 million* in investments in 2020, which is six times the amount raised in 2019 and 72 percent of the amount raised in the industry’s history (2016–2020). This included the first two series B raises in the segment: Memphis Meats’ landmark $186 million round and Mosa Meat’s $75 million round (which later closed at $85 million after a further $10 million was raised in February 2021).

While investor confidence in alternative protein companies is driven by multiple market factors, the many planetary issues laid bare over the past year illuminate the risks associated with business-as-usual portfolios and practices.

“The investor community is waking up to the massive social and economic potential of food technology to radically remake our food system,” says GFI senior investor engagement specialist Sharyn Murray. “Early trend setters like Impossible Foods, Beyond Meat, Memphis Meats, and Mosa Meat continue to perform well, and there are more and more entrepreneurs who see the potential of alternative proteins to succeed in the marketplace while having a positive global impact on food sustainability and global health.”

The surge in investments over the past year signal a growing appetite for climate-friendly investments that reap returns that benefit both investors and their communities. Alternative protein investments can prime the pump for dramatic improvements in both the productivity and efficiency of our food system and, on a broader scale, the greening of our economy—where growth is decoupled from environmental harm. In addition to expanding consumer choice, investments in alternative protein innovation can stimulate economic growth, create jobs, reduce global health risk, and contribute to food safety and security.

As the world still grapples with a global pandemic, the prospect of meat produced with zero risk of contributing to zoonotic disease transmission or antibiotic resistance has even greater relevance. Recognizing that alternative proteins offer a scalable solution that gets the world closer to a more secure, sustainable, and just global food system, investors are positioning themselves at the forefront of that transition.

While 2020 was a record-breaking year for alternative proteins, significantly more investment is needed from both the public and the private sector to mitigate the environmental impact of food production and sustainably feed a growing global population.

It will be scientifically impossible for governments to decarbonize the global economy unless the amount of meat produced via conventional animal agriculture significantly declines. With global livestock contributing an estimated 14.5 percent of all anthropogenic greenhouse gas emissions, the status quo food production methods of today are not capable of feeding 10 billion while achieving net-zero emissions by 2050. The time is now.

By partnering with companies throughout the supply chain, GFI aims to help the alternative protein industry compete with conventional animal products on taste, price, and convenience—key consumer choice drivers. When paired with public investment in open-access R&D, this market-based approach will help ensure that alt proteins are affordable and accessible, leading to a more resilient food supply, more choices for consumers, climate-forward job creation, and a stronger economy.

“2020 was a breakout year for alternative proteins, with record investment flowing into all segments of the industry. This is yet another signal of the significant potential the private sector sees in this rapidly growing global industry,” says Bushnell. “While the amount is record-breaking, more investment is needed—from both the public and the private sectors—to meet the urgency of this moment. A large-scale shift toward alternative proteins will be critical to mitigating the environmental impact of food production, meeting the Paris Climate Agreement, and sustainably feeding a growing global population.”

Sign up to receive GFI’s 2020 State of the Industry Reports.

For deeper insights on the state of alternative proteins, sign up to receive GFI’s trio of 2020 State of the Industry reports—one each for plant-based, fermentation-derived, and cultivated meat—which will be published in May.

To quantify 2020 alternative protein investment activity, GFI used its company database to create a custom list of global plant-based meat, egg, and dairy companies; cultivated meat companies; and fermentation companies devoted to alternative proteins tracked by PitchBook Data Inc. This yielded a list of more than 550 companies. GFI was unable to include some qualifying plant-based, cultivated, and fermentation companies — namely, those in the early stages of development — because they do not yet have profiles on PitchBook. Please note that the figures published in this release may differ from prior figures published by GFI as we continuously improve our dataset. For the purposes of this release, “investment,” “investment capital,” and “invested capital” are used interchangeably to refer to deals including accelerator or incubator funding, angel funding, seed funding, equity or product crowdfunding, early-stage venture capital, late-stage venture capital, private equity growth/expansion, capitalization, corporate venture, joint venture, convertible debt, and general debt (but excludes mergers, acquisitions, reverse-mergers, buyouts and leveraged buyouts, IPOs, subsequent share offerings, and private investment in public equity). 2020 data pertains to the 52-week period ending December 31, 2020. This data has not been reviewed by PitchBook analysts.