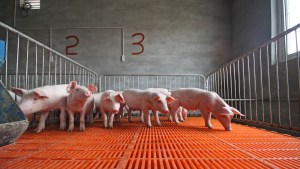 A rare strain of Swine Flu that usually infects pigs has been reported in a human variant case in Canada.

According to a leading news outlet, it is the third time a human variant of the strain has been recorded in the Manitoba province.

The H3N2 influenza was reported earlier this month in a news release, CBC reveals.

It came after the infected individual was tested for COVID-19 since experiencing flu-like symptoms.

Whilst the test came back negative for COVID-19, the swine flu strain was detected. The individual has since recovered.

Despite it being rare among humans, Public Health Officials confirmed it can be transmitted ‘from time to time’, the CBC story adds. However, officials claim it is an isolated case.

Moreover, the outlet claimed viruses such as these are not transferred by eating pork or ‘other products that come from pigs.

There is a wealth of evidence blaming factory farming and slaughterhouse for spreading diseases such as these, however.

This is due to the cramped conditions many farmed animals are kept in as part of the animal agriculture industry.

Though different from the Manitoba case, a new strain of Swine Flu was identified last year and fears surfaced that it held pandemic potential.

It comes just over a decade after the H1N1 Swine Flu influenza swept across the world.

Moreover, it killed an estimated 300,00 people.

The disease also resulted in a mass cull of pigs in Nigeria, Africa across 2020.

The new strain should not be ‘taken lightly’, a doctor on the APP Committee of Infectious Diseases warned.