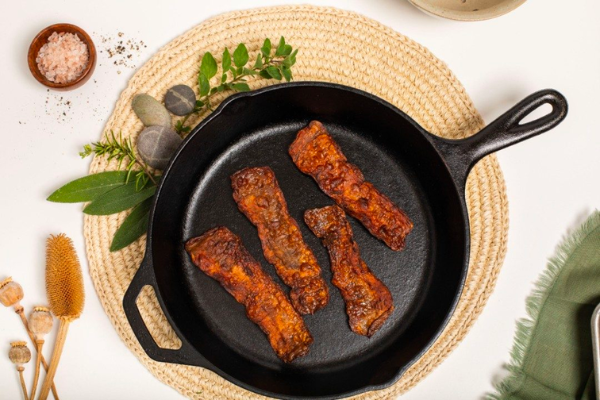 Notable news this week came from the alternative protein sector when My Forest Foods Co. announced it is building the “world’s largest” vertical farm for mycelium, the fungi-based ingredient the company uses to make its plant-based bacon product. The 120,000-square-foot facility will help My Forest Foods increase its alt-bacon output with the goal of serving 1 million customers by 2024.

In other alt-protein news, a Belgian startup is using precision fermentation to make analogues of not just beef and chicken, but also wooly mammoth.

The Belgian startup uses precision fermentation to create heme commonly found in beef, chicken, and other meats. It is now developing a plant-based ingredient that will create the taste of wooly mammoth.

The company’s patented Source Hydrropanels technology draws pure water vapor out of the air and converts it into mineralized drinking water. Source Global will put its new funding towards further innovation in renewable water technologies.

The company’s ENKOMPASS tech platform finds new, targeted chemistries for pest and weed protection on crops. Enko will use the funds to expand its product pipeline.

Holey Grail uses taro root to produce gourmet donuts. New funding, which includes both seed and Series A rounds, will go towards an expansion to Los Angeles.

A good veggie burger is a complex, innovative, and mouthwatering thing, but our Western belief that it must be ‘meaty’ has led to today’s pick of ultra-processed offerings.

Instacart confidentially filed for an initial public offering with the Securities and Exchange Commission earlier this year. The grocery delivery company generated a net profit in the second quarter of 2022, according to sources.

Resumed grain shipments from Ukraine are being ‘put to the test’ following a recent deal that was brokered by Turkey and the United Nations.

Giant will bring Loop’s service, which allows customers to buy products in reusable and refillable containers, to stores in the Washington, D.C. area starting this fall.

13. McDonald’s US Plant-Based Burger Test Is Over – Food Dive

The test “concluded as planned,” according to McDonalds. However, the news comes as analysts speculate on low product sales and partner Beyond Meat’s stock dropping.

Some underground fungi can be vital in the era of climate change, storing exceptional levels of carbon underground, helping plants survive drought and pests, and feeding nutrients to crops.

The General Store by Walmart will offer outdoor-focused products like s’mores fixings, cast iron skillets, and local goods to vacationers. Walmart has developed these mini-stores in partnership with hospitality company Getaway.