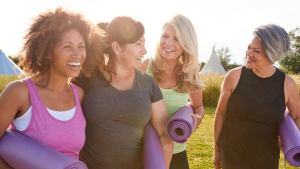 A new study has connected dietary changes to the improved symptoms of menopause. Researchers discovered a vegan diet rich in soy reduces the number of vasomotor symptoms, including hot flashes, for menopausal women.

The research was published by the North American Menopause Society in the journal Menopause.

The study divided up postmenopausal women who experience two or more hot flashes a day into two groups. The intervention group consumed a low-fat, plant-based diet. The daily diet also included a half-cup of soybeans added to a soup or a salad.

Researchers recorded the frequency and severity of physical, vasomotor, psychosocial, and sexual symptoms.

Women’s Special: How Juliet Gellatley Took Down One Of The UK’s Most Infamous Farms

The study found that a vegan diet rich in soy reduced moderate-to-severe hot flashes by 84 percent – from around five a day to less than one per day.

Nearly 60 percent of women found that their moderate-to-severe hot flashes completely disappeared over the 12-week study period. And all types of hot flashes decreased by 79 percent.

Neal Barnard, President of the Physicians Committee and adjunct professor at the George Washington University School of Medicine, led the study.

He said: “This is a game changer for women aged 45 and over, most of whom we now know can get prompt relief from the most severe and troubling menopause symptoms without drugs.”

Study author Hana Kahleova is the Director of Clinical Research for the Physicians Committee. She said: “Previous studies have shown that soy could be beneficial, so we decided to put a diet change to the test

“We believe that the combination is what is important. By the end of the study, the majority of women on a plant-based diet rich in soy reported that they no longer experienced moderate-to-extreme hot flashes at all and that they experienced significant improvements in their quality of life.”

The post Plant-Based Diet Linked To 84% Drop In Menopausal Symptoms appeared first on Plant Based News.