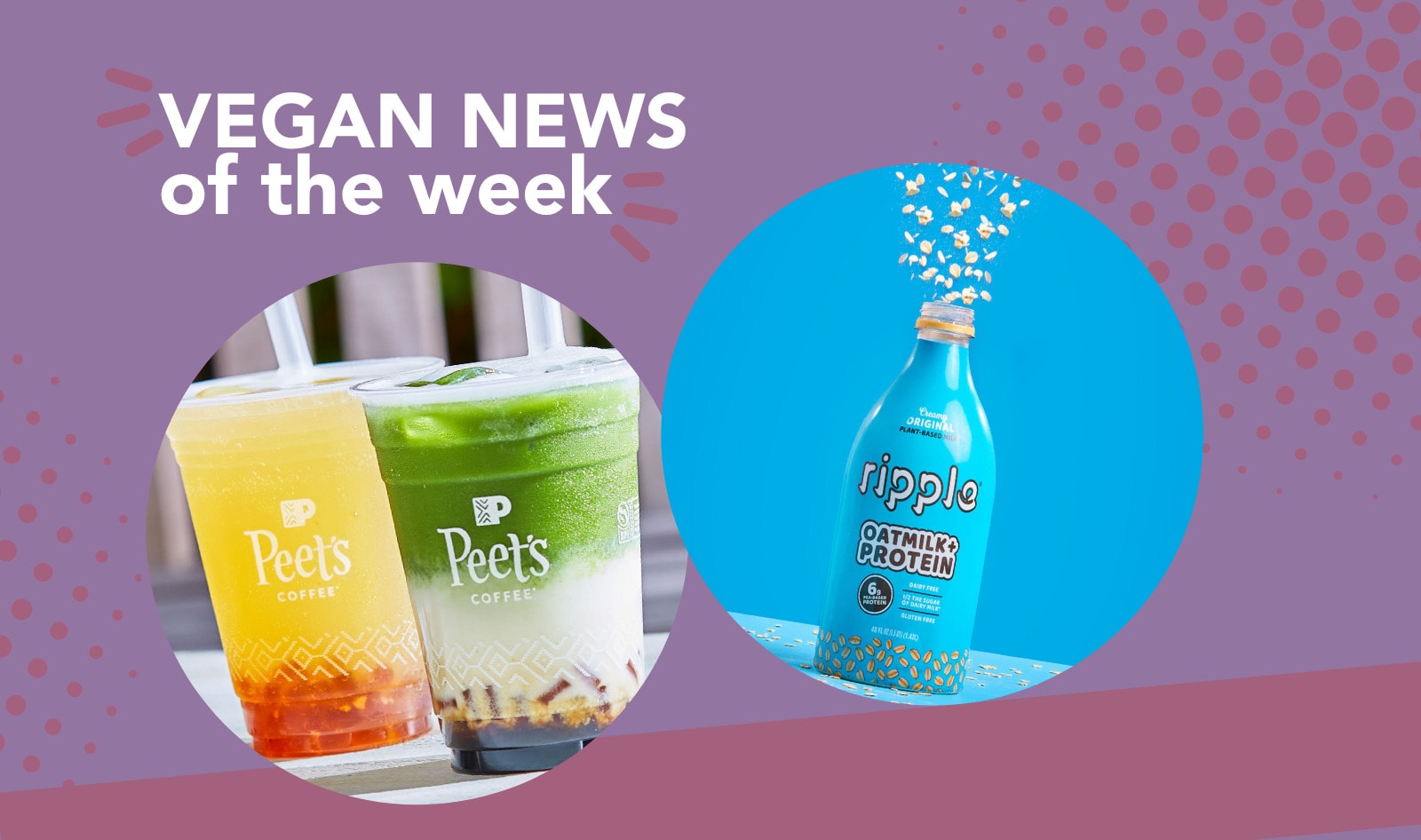 When it comes to vegan-friendly coffee chains, Peet’s Coffee is high on the list. Not only does it offer a variety of vegan milks, Peet’s stole our hearts when it launched the Everything Plant-Based Sandwich, a vegan sandwich made with Beyond Meat Breakfast Sausage patty, mung bean-based folded JUST Egg, and melted dairy-free cheddar cheese, served on an everything bagel thin.

“Jelly beverages are a refreshing treat that can be dreamed up and enjoyed with endless flavor and color combinations, especially during summer,” Patrick Main, Peet’s Senior Beverage Innovator, said in a statement. “At Peet’s, our Brown Sugar Jelly is fully plant-based and can be added to any cold drink for refreshing sweetness, irresistible texture, and luscious layers that look and taste delicious.”

2Ripple gets into oat milk

Ripple Foods came onto the vegan scene in 2016 with the launch of pea protein-based milk at Target and Whole Foods. Since then, the brand has expanded its pea-protein-know-how into a variety of categories, including yogurts and ice cream. Last year, the brand raised $60 million in Series E funding to explore other pea-sibilities in categories such as vegan cheese and soft serve.

Ripple is now adding oat milk to the mix with the launch of Oatmilk + Protein, a beverage that features creamy oatmilk and pea protein. Developed to be nutrient-rich, the new product offers six grams of plant-based protein per serving (which is three times more than oat milk alone). When compared to dairy milk, Ripple’s Oatmilk + Protein is 50-percent lower in sugar, and 50-percent higher in calcium.

“There are many consumers who like the taste and texture of oat milk, but the reality is they are disappointed in the nutritional profile, specifically the lack of protein,” Ripple CEO Laura Flanagan said in a statement. “Ripple is changing the game so that those who like oat milk, can now really love it, as Ripple’s version of oat milk provides three times more protein than regular oat milk, along with the great taste and creamy texture people expect. We’ve brought the power of protein to oat milk, to take it to the next level—this is how Ripple does oat milk.”

The new and improved Beyond Burger and Beyond Beef—which the company released in the United States last year—is also making its way to Canadian retailers this week right in time for summer grilling season.

Tofu giant Nasoya is now producing vegan steak under its Plantspired line. Created as a convenient protein option, the new Plantspired Steak is perfect for recreating vegan versions of Korean barbecue favorites. The steak strips are made from soy protein with a flavorful sauce that has a sweet, savory, and smoky bulgogi flavor.

Plantspired Steak first debuted on the menu at 30-location chain Waba Grill where it is a third protein option, next to chicken and animal-derived steak, and can be ordered as part of plates and bowls. This week, Plantspired Steak made its retail debut at Albertsons, Safeway, Vons, Pavilions, Sprouts, Giant Eagle, Big Y stores and more—giving home cooks a chance to experiment with plant-based steak.

During the uncertain times at the height of the pandemic, beloved vegan chain Veggie Grill experimented with various concepts to keep your at-home food orders interesting. Launched at the beginning of 2021, Más Veggies Taqueria was a virtual Mexican restaurant concept that operated out of Veggie Grill locations and offered vegan meals for delivery only through popular delivery platforms, including DoorDash, Postmates, Uber Eats, and Grubhub. The menu was filled with dishes such as Crispy Poblano Chickin’, Shredded Jackfruit Chipotle Carnitas, Cauliflower Asada, and Savory Tex-Mex Taco Meat in the form of tacos, burritos, nachos, and bowls.

This week, Veggie Grill is fully integrating the concept into its regular menu. That means that new plant-based protein favorites such as Crispy Baja Fish, Chickin’ Tinga, or Smokey Mushroom can be ordered as part of tacos, burritos, or nachos at all 30 Veggie Grill locations nationwide.

Veggie Grill’s other pandemic-born concept, Stand-Up Burgers, is making moves, too. On June 17, the newest location of this vegan burger spinoff will open in Culver City, CA as the chain’s first Southern California outpost. “We’re thrilled to be expanding Stand-Up Burgers and to bring this concept to our hometown of Los Angeles,” Jay Gentile, Veggie Grill’s newly appointed CEO, said in a statement. “We’re confident that Angelenos will identify with our mission of inspiring the world to eat less meat while revolutionizing traditional comfort food to be deliciously vegan.”

To celebrate the opening, Stand-Up Burgers is hosting a plant-based party filled with giveaways every day from June 16 to June 21. In addition to the new Culver City location, the burger spinoff will open its first New York City location later this summer and three additional LA-area outposts by the end of the year.