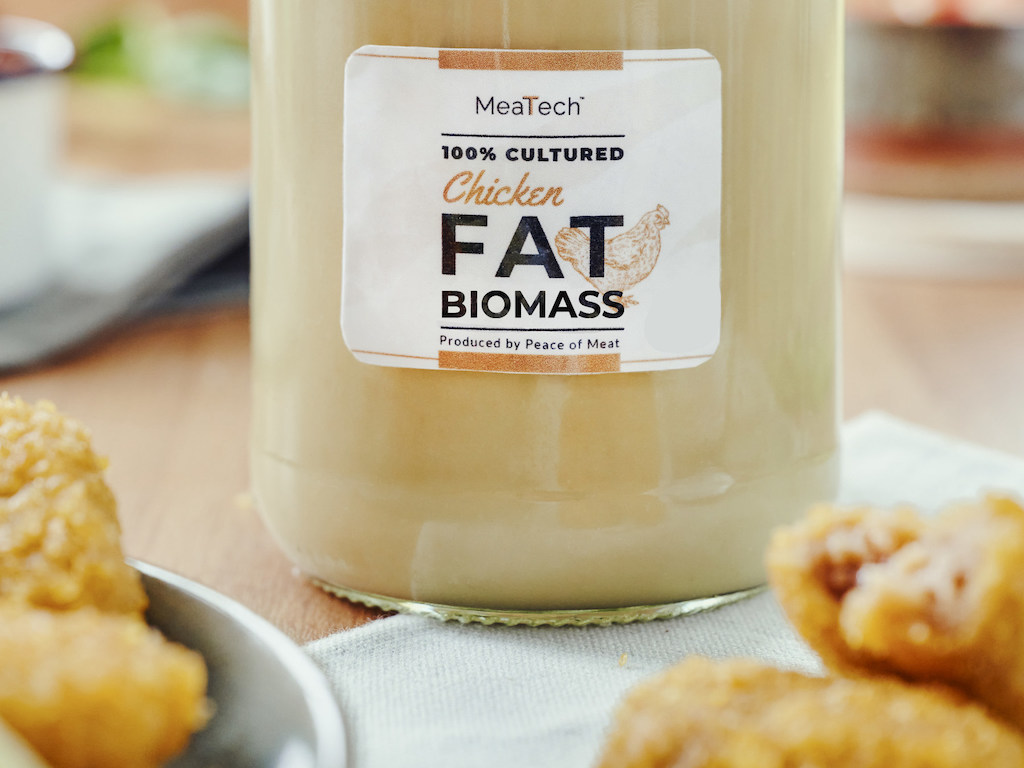 Israel-based MeaTech has confirmed its wholly-owned Belgian subsidiary, Peace of Meat, will be working with Scotland’s Enough, an innovator in the mycoprotein sector that specializes in fungi fermentation using renewable feedstocks. Together, the two have signed a joint development agreement to accelerate MeaTech’s ambitions of launching hybrid meat products made with cell-based fat.

Peace of Meat will be bringing cultivated chicken developments to the table, in the form of fat biomass. Enough will supply nutritionally rich mycoprotein, complete with essential amino acids, fibre, zinc and iron. The two will be brought together to create hybrid meat products that claim environmental superiority over conventional alternatives.

A middle ground between plant-based and cultivated meat

The taste, smell and mouthfeel of conventional chicken meat will, MeaTech claims, come from infusing mycoprotein with its cultivated fats. The theory was tested at a recent tasting event. MeaTech had one of its chefs make hybrid chicken nuggets, using Peace of Meat’s cell-based fat. According to the company, the response was “unanimously positive”.

“We are excited to sign a collaboration agreement with ENOUGH, a global leader in mycoprotein as an ingredient, to accelerate our commercialization of next-generation meat substitutes — hybrid products with cultured fat biomass. These game-changing, primarily plant-based products promise to offer a meatier taste and mouthfeel that is closer to conventional meat products,” Arik Kaufman, CEO of MeaTech said in a prepared release.

Hybrid meat is not a new concept but is still relatively underrepresented, especially when compared to fully plant-based or cultivated interests. Containing animal fat, the products are only suitable for meat-eaters but offer predominantly plant-based protein sources. For those looking to reduce their meat intake or take up a flexitarian lifestyle, they are a happy medium between shunning all animal protein and embracing fully cultivated options.

Last year, Peace of Meat was able to successfully produce 700 grams of pure cultivated chicken fat in an uninterrupted production cycle. With its tech proven, plans have been put in place to scale up the pilot facility to full manufacturing capacity in 2023. Enough’s flagship plant is located in the Netherlands, ensuring the two are within easy distance of each other.

“We believe that the future of sustainable protein will include a mix of plant- fermentation- and cell-based products,” Jim Laird, CEO of Enough said in a statement. “Therefore, we are delighted to combine our fermented biomass with the cultured chicken fat biomass being developed by MeaTech’s subsidiary, Peace of Meat.”

A stepping stone to cultivated acceptance

MeaTech remains engaged in developing its cultivated meat line. In December last year, it unveiled the largest cell-based steak to be produced using bioprinting techniques. Weighing in at 104 grams, it was made entirely from cultivated fat and muscle cells, with no plant-based fillers. Progressing in this arena remains a top priority for MeaTech, but consumer acceptance will remain a hurdle.

A study of the factors affecting acceptance of consumer meat, published in the journal Science Direct, revealed that plant-based meats remain more popular in theory, due to price and sensory appeal. Cultivated options fall foul of ignorance surrounding the technology and concerns about how ‘natural’ the final products are. Bringing together part-cultivated and part-plant-based ingredients offers a bridge to future developments.

Hopping on the hybrid meat trend

Shanghai-based Herotein announced its strategic partnership with the U.S.’s Mission Barns in October last year. The latter is a cell-ag startup producing cultivated animal fat which will be added to Herotein’s plant-based chicken and beef analogues which are sold through foodservice and retail partners in China.

Back in February 202, California’s New Age Meats raised $2 million in a seed extension round to scale production of its hybrid meat analogues. Unlike Peace of Meat and Herotein, it doesn’t add cultivated animal fat to plant-based protein. New Age takes the reverse tack, producing a cultivated meat base and adding plant-based ingredients for enhanced taste, texture and nutrition.