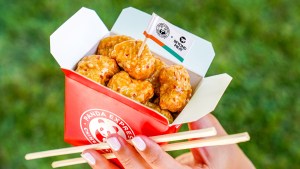 Global fast-food chain Panda Express, which specializes in American-Chinese cuisine, has teased the launch of a vegan version of one of its most iconic dishes.

The company confirmed it is partnering with vegan meat giant Beyond Meat, making it the first Asian concept chain to serve the brand’s products on its menu.

Soon, Panda Express will unveil Beyond the Orginal Orange Chicken. It’s a vegan twist on the popular Orange Chicken, the chain’s ‘sweet and spicy comfort classic’.

Via its Instagram account, Panda Express uploaded a short teaser video consisting only of emojis and captioned: ‘Something new is coming’.

When customers began posting questions on whether vegan Orange Chicken was about to be launched, the company made no denails.

Whilst Panda Express says it will reveal the news on July 26, reports soon surfaced confirming the launch.

According to CNBC, an executive director for the company said: “Creating a fresh new take on a classic favorite is a great and accessible way to introduce plant-based proteins to our guests and perhaps even drawing a new audience for Panda.”

However, it will only be available at select sites in New York City and Southern California, the news outlet added. Additionally, it is only available for a limited time and whilst stocks last.

Beyond Meat claims the dish ‘is unlike any plant-based chicken dish you’ve had before’.

The ‘brand-new plant-based chicken innovation’ was also co-developed with Panda Express, and promises to be just as ‘crave-able’.

The post Panda Express Teases Launch Of Vegan Orange Chicken With Beyond Meat appeared first on Plant Based News.