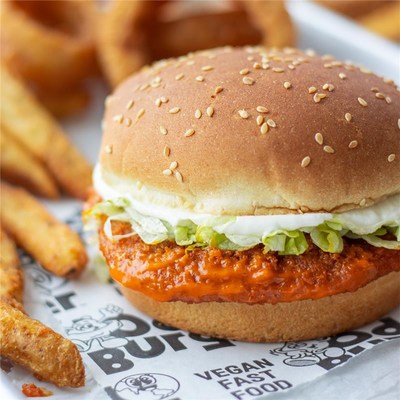 LONDON, ON, Oct. 5, 2022 /PRNewswire/ - Odd Burger Corporation (TSXV: ODD) (OTCQB: ODDAF) (FSE: IA9), one of the world's first vegan fast-food chains and the first to go public, today announced that it has launched its franchising operations in the United States.

Odd Burger U.S. also intends to begin the process of filing its franchise offering with certain additional U.S. States where filings are required to be completed prior to any offers or sales, including Florida, Indiana, Kentucky, Michigan, Nebraska, South Dakota, Texas, Utah, and Wisconsin. The process is expected to be completed by the end of November 2022.

"We could not be more excited to initiate our U.S. expansion and extend our brand to millions of people in the U.S. market," says James McInnes, Co-Founder and CEO of Odd Burger. "We have already received hundreds of inquiries from potential franchisees in the U.S. and now we will begin the process of finding the perfect franchise partners to work with."

In addition to seeking individual franchise partners, Odd Burger U.S. is developing Area Representative and Area Development Programs, and will be seeking area representatives and area developers for the U.S. market to further accelerate its growth. In Canada, Odd Burger has signed Area Representative Agreements for British Columbia, Alberta and Ontario, that will see over 76 locations developed for these territories over the next 8 years.

Odd Burger is also pleased to announce that it has signed a Franchise Agreement for a location in Nanaimo BC, with franchisees Drihant Isamaliya and Kamalpreet Kamalpreet.  The restaurant is expected to open in 2023 once the franchisees find a location and complete construction.  The Nanaimo location marks the 11th Franchise Agreement signed in Canada. Additionally, Odd Burger currently operates 6 corporate locations in Ontario.

The Company is also pleased to provide a progress summary of previously announced Canadian locations:

For more information about starting a franchise with Odd Burger in the U.S. or in Canada, applications can be submitted on the Company's website: https://oddburger.com/pages/franchise-apply

Odd Burger Corporation is a chain of company-owned and franchised vegan fast-food restaurants as well as a food technology company that manufactures and distributes a line of plant-based protein and dairy alternatives to foodservice channels under the brand Preposterous Foods. Odd Burger restaurants operate as smart kitchens, which use state-of-the art cooking technology and automation solutions to deliver a delicious food experience to customers craving healthier and more sustainable fast food. With small store footprints optimized for delivery and takeout, advanced cooking technology, competitive pricing, a vertically integrated supply chain along with healthier ingredients, Odd Burger is revolutionizing the fast-food industry by creating guilt-free fast food. Odd Burger Corporation is traded on the TSX Venture Exchange under the symbol ODD, on the OTCQB under ODDAF, and the Frankfurt Stock Exchange under IA9. For more information visit https://www.oddburger.com.

This press release contains forward-looking statements that involve a number of risks and uncertainties, including statements that relate to among other things, the Company's strategies, intentions, plans, beliefs, expectations and estimates, and can generally be identified by the use of words such as "may", "will", "could", "should", "would", "likely", "expect", "intend", "estimate", "anticipate", "believe", "plan", "objective" and "continue" and words and expressions of similar import. Forward looking information contained or referred to in this news release includes statements relating but not limited to:, the impact of the development agreement in the areas discussed; the expected future expansion of Odd Burger locations and the number of franchises and the benefits the Company expects to derive therefrom; as well as the number of retail outlets to be opened and the Canada and Franchises in the United States discussed herein. Although the Company believes that the expectations reflected in such forward-looking statements are reasonable, such statements involve risks and uncertainties, and undue reliance should not be placed on such statements. Certain material factors or assumptions are applied in making forward-looking statements, and actual results may differ materially from those expressed or implied in such statements. Important factors that could cause actual results to differ materially from expectations include but are not limited to: financing risk, general business and economic conditions (including but not limited to currency rates); changes in laws and regulations; legal and regulatory proceedings; and the ability to execute strategic plans. The Company does not undertake any obligation to update publicly or to revise any of the forward-looking statements contained in this document, whether as a result of new information, future events or otherwise, except as required by law.

Neither the TSX Venture Exchange nor its Regulation Services Provider (as that term is defined in the policies of the Exchange) accepts responsibility for the adequacy or accuracy of this press release.