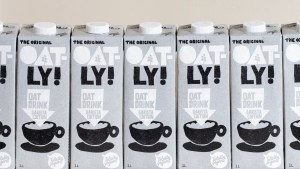 Oatly is suing a rival plant-based milk maker over an alleged trademark infringement.

The Swedish brand has started a legal battle against Cambridgeshire-based Glebe Farm Foods.

Oatly has accused the family farm of having a similar packaging style, and requests it stops using the name PureOaty. It is also reportedly seeking damages and costs.

A two-day trial began at London’s High Court earlier this week. However, the outcome could take several weeks to be announced.

According to the BBC, Oatly says it contacted Glebe Farm Foods last year to raise awareness of the alleged trademark issue.

A spokesperson for the company said: “We, unfortunately, received no constructive response from them.

“We’re therefore now involved in an ongoing court case and we have no further comment as we await the results.”

‘Proud of what we stand for’

Glebe Farm Foods argues its PureOaty name references the ‘purity of the product’ and believes it ‘hasn’t done anything wrong’.

On its website, the farm wrote: “As a British brand, and as a farming business, we are proud of what we stand for and have been achieving in the last 18 months in oat milk, alongside many years of oat milling and cereal production.

“We have always been surprised by this, and although Oatly are much bigger than us, we do not believe we have done anything wrong.”