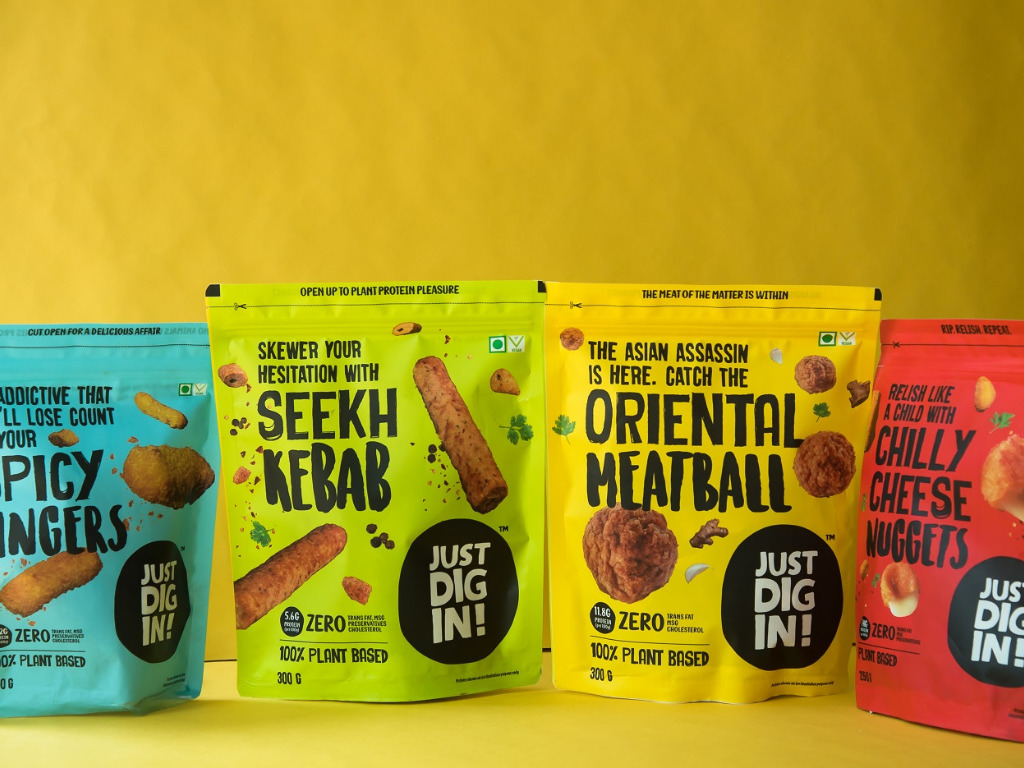 Indian foodtech startup Novolutions has announced its focus is expanding from mocktail drinks to include plant-based protein products. Marketed under the moniker Just Dig In!, a range of alternative meat snacks are currently debuting across New Delhi. Items currently centre around chicken analogues with meatballs, nuggets, kebabs and spicy fingers confirmed as being available.

Just Dig In! has partnered with Modern Bazaar for distribution. Products are available in the latter’s stores and via online commerce platforms from both parties.

The global smart protein sector drew $5 million in investments, in 2021. New brands are entering the sector regularly, with India demonstrating a growing penchant for participation. At last count, around 50 domestic startups were in operation. Despite a $2.1 billion development fund made available to support the meat and dairy sectors, the Indian smart protein sector continues to diversify and shape itself into an industry that the global market is watching.

Taste and nutrition expert Kerry revealed that India is a high-growth market for plant-based foods in a study published last December. A key takeaway was a general sense of openness to animal-free foods, with taste, texture, and local adaptability identified as primary considerations for uptake. A separate study, commissioned by the Good Food Institute India, revealed that 63 percent of Indian consumers are very or extremely likely to purchase plant-based meats. The majority were identified as ‘early adopters’ or younger, financially secure customers.

Just Dig In! has registered its intent to expand its distribution network outside of Delhi. It claims to be in talks with a number of leading retail food chains that are interested in stocking its Indian-Chinese fusion snack range. In addition, hotel and catering channels are being explored for viability.

“Our core team is comprised of people who have rich experience in channel sales, the foodservice industry (HoReCa), and offshore export markets,” Just Dig In! founder Somesh Behera said in a statement. “Having worked in the dairy, meat, and frozen foods industries in the past, holding key strategic positions for both domestic and international food brands, we spotted gaps in the market. We wanted to develop products that can serve as parallels to animal-derived foods, while being a whole lot more sustainable.

Behera acknowledges that he and much of his team are not vegetarian and claims this gives them an advantage when developing smart protein products. He states that the Just Dig In! product range is aimed at “guilty” vegetarians who want to try and reduce their meat intake, without compromising on the tastes and textures they enjoy.

“We want to be the right alternative – in terms of taste, texture and functionality, and be the brand that helps people transition from one extreme to another when it comes to food choices,” Behera said in a statement. “We feel today’s niche is tomorrow’s mass.”

In April, BVeg announced it is set to become one of the first companies in India to leverage high moisture extrusion technology.  It came after the startup signed a strategic partnership with Swiss equipment manufacturer Bühler. Taking possession of the machinery allows BVeg to begin creating a modern production plant that will produce “indistinguishable” vegan meat.

At the start of the year, ITC, one of India’s largest conglomerates, declared its intention to enter the plant-based meat space. Already a household name, thanks to owning multiple favourite domestic brands, it announced an imminent portfolio expansion to include burger patties and chicken-free nuggets.

All photos by Just Dig In!, unless stated.