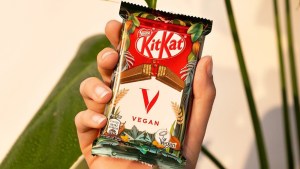 Nestlé is considering a global expansion of its vegan KitKat.

The Swiss conglomerate debuted the dairy-free chocolate bar in the UK earlier this week.

KitKat V features rice-milk chocolate and the brand’s iconic wafer. It was developed by confectionary experts in a research and development center in York, England.

According to Daily Mail Australia, a Nestlé spokesperson said the vegan treat will launch ‘later in the year across a number of countries worldwide’.

Specific release dates were not specified.

A poll conducted by Plant Based News found more than a quarter (26.5 percent) of readers would not buy the dairy-free bar.

“Nope, won’t buy any Nestlé product ever,” one social media user wrote. “Motive is everything and their motive is money at all costs.”

Another added: “Absolutely no way would I ever give Nestlé one penny of my money!”

However, 73.5 percent said they would purchase the vegan KitKat – criticizing the feasibility of boycotting all non-vegan corporations.

“I also buy most food from Tesco, they’re not a vegan company, same thing?”