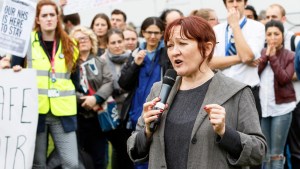 Last week, MPs debated the Animal Welfare (Sentience) Bill in the UK parliament. If successful, animals will be legally recognized as being capable of feeling pain. Notably in the debate, Kerry McCarthy, who is the Labour MP for Bristol East spoke up for the bill, amid acceptance that it is a starting point.

But the debate also noted steps backward, with voices sparking from The Conservatives on maintaining the hunting and shooting of animals.

“It is one thing to recognize the feelings of animals, but another to act on this knowledge and actively improve their lives for the better,” McCarthy said.

Here is what she outlined to the government on how it can better support animals, and what other MPs had to say on the issue.

What is the Animal Welfare (Sentience) Bill?

Last year, the UK government announced it would recognize crabs, lobsters, and octopuses as sentient. The cephalopod and decapod mollusks formed part of the bill as it was introduced into parliament.

By recognizing these beings as sentient, the government is accepting that they can experience feelings and emotions. This has been the case for animals with backbones, aka vertebrates, for more than a century.

This means they have the capacity to feel joy, pain, anxiety, and warmth, which is backed by a host of scientific studies.

The bill is currently in the committee stage, meaning it is close to becoming enshrined in law – with just four steps to go.

McCarthy welcomed the bill and stressed the importance of recognizing animals as sentient.

She reminded her peers that while people in the UK often “boast about how good we are” in terms of animal welfare, “there are still many examples of where animals are abused and exploited.”

And, paid homage to the organizations working to expose the misery these animals endure: namely Animal Equality and Viva!.

She said: “We have seen reports of overcrowding, filthy conditions, and even cannibalism among pigs on Hogwood Pig Farm.

“We have seen pigs being killed by having their heads slammed to the floor on Yattendon pig farm, chickens dying in heatwaves at Moy Park farm. And, chickens dying of thirst, suffering ammonia burns, or resorting to cannibalism on multiple chicken farms that supply Tesco.

“All the farms I have mentioned were Red Tractor-approved, with supposedly higher animal welfare. We have a long way to go.”

Her speech continued: “If we truly respect animals, we must do a lot more than just pay lip service to sentience.”

McCarthy insisted we have to end the exploitation and abuse of animals on factory farms.

She said we must also:

Elsewhere in the debate

Labour MP Jim McMahon agreed: “Animals are capable of bringing us huge joy, and it is right to ensure that they avoid avoidable suffering.”

Luke Pollard voiced concerns about how the bill would be implemented, criticizing Defra along with it. He also questioned how animal welfare was to be addressed within trade deals.

But for the Conservatives’ Sir Geoffrey Clifton-Brown, things were different.

He proclaimed shooting and angling as being “highly important” for the UK economy.

“Shooting contributes about £2 billion to GDP and supports the equivalent of 74,000 full-time jobs,” he said. Moreover, angling – aka fishing for sport – is estimated at being worth £4 million to the economy, he added. And, it provides upwards of 40,000 jobs.

This is why Clifton-Brown says the government must ensure the bill is not enshrined in law on the basis of being “a public relations exercise to meet the demands of activist groups and the tabloids.”

He also claimed that there is “no scientific proof” that invertebrates are sentient.

And yet, the government bore witness to an 80-page report which contained hundreds of studies providing significant evidence of animal sentience.

You can view the debate in full via Hansard here

The post MP Kerry McCarthy: ‘We Need Action Not Words On Animal Welfare’ appeared first on Plant Based News.