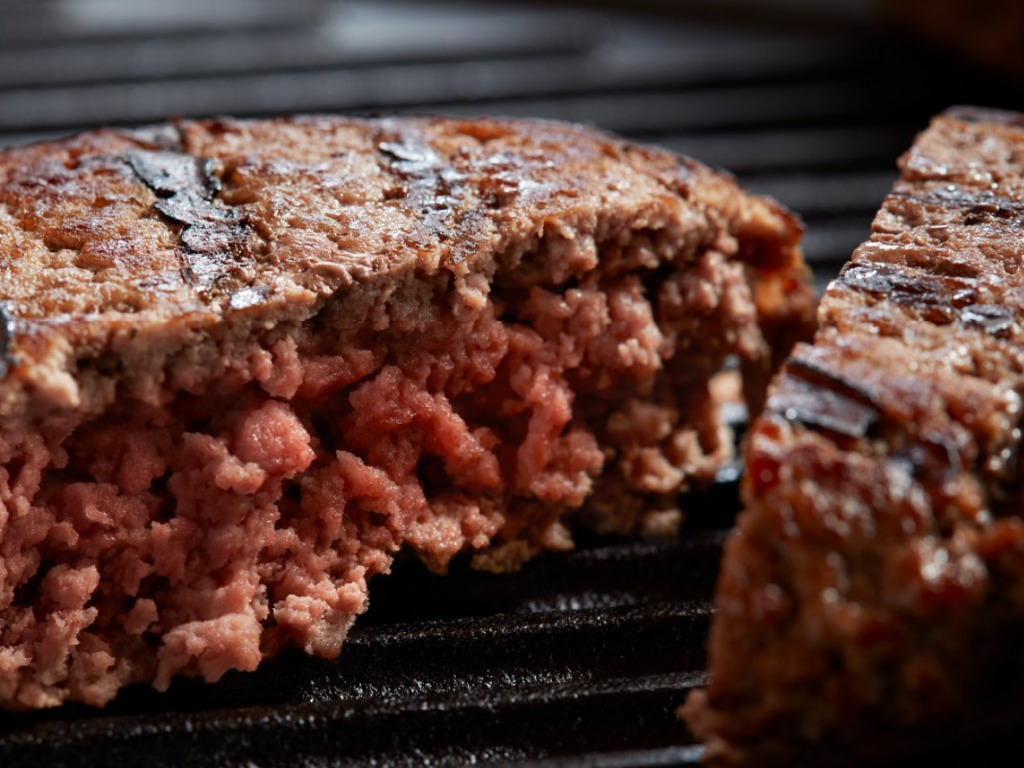 Boston-Based Motif FoodWorks has announced a new range of plant-based meat products. Dubbed Motif MoBeef, MoPork and MoChicken, launches will be staggered from now through to 2023. The products are aimed squarely at foodservice providers, retailers with private label ranges and distributors. MoChicken will be the last release, slated for launch in 2023. MoBeef burger patties kick off distribution and are available now.

Alongside Motif’s big reveal comes the news that Robert Downey Jr.’s Footprint Coalition Ventures has invested in the food tech startup. The amount remains undisclosed, but the two say that collaborative working will form part of the new relationship. FootPrint is expected to participate in the development of future innovations, though this was not qualified.

From ingredients to finished products

Motif has previously focussed on being an ingredients developer. Its proprietary Hemami and Appetex additives have garnered such positive reception that the move to finished plant-based meats was a natural one.

Consumer opinions were gleaned through restaurant and domestic tests of food products infused with Hemami, a heme protein that enhances meaty flavours and Appetex, a texture enhancer. Both were launched in 2021 on a B2B basis and are reported to have performed well.

The move to private label offerings comes at a time when consumers are looking to lessen their grocery spending while improving their health. Branded plant-based meats such as Beyond Meat, still come under fire for high prices. If Motif can produce a comparable alternative that chains can sell as their own lines, there is a chance to sway new customers.

As it stands, the private label sector accounts for 23.5 percent of global meat sales. In comparison, private label plant-based alternatives claim just 7.4 percent. Scope for claiming more market share is clear, especially in the U.S. where the animal-free unbranded products stand at 2.2 percent of sales.

Snaring investment from FootPrint is a coup for Motif. The venture firm has become synonymous with investing in innovative companies seeking to create a new and sustainable food system. Previous recipients of backing include cultivated seafood developer Wildtype and plant-based cheesemaker Nobell.

“If plant-based foods are going to make a real impact on sustainability, we need an approach that’s both delicious and nutritious,” Robert Downey Jr., founder of FootPrint Coalition Ventures, said in a statement. “By focusing on both better tasting and healthier options, Motif is not only making a difference in products today, but reimagining the future of tomorrow’s plant-based foods.”

It has not been revealed how FootPrint intends to participate in the development of new ingredients and finished lines, though it has been suggested that its BetaTasters programme will play a role. This allows consumers to receive free samples of new products still at development stage, in exchange for detailed feedback.

Motif’s move into finished plant-based meat products and fresh investment from FootPrint comes amid ongoing legal troubles with Impossible Foods. Impossible fired the first shot back in March, suing Motif for patent infringement. The case centred around the latter developing burger patties to demonstrate its Hemami and Appetex ingredients. These are the same patties that Motif will now be selling, which will give Impossible pause. It had previously conceded that Motif was not a CPG company and therefore not operating within the same framework as itself.

With the infringement case in full swing, Motif returned fire in April, launching a petition to challenge the validity of Impossible’s original patent. Motif has requested that judges look again at the originality of using heme proteins in plant-based meats. It claims this has been done prior to Impossible and therefore the patent was issued in error.

The rise of private label offerings

The similarities between Motif and Impossible continue, as the latter announced in March that it will be supplying private label products to Kroger. The largest supermarket chain in the U.S., Kroger already has a proprietary plant-based meat line called Simple Truth. Partnering with Impossible will allow Kroger to offer more realistic analogues to its consumers. The alternative protein giant, in turn, will be placed in front of a wider audience.