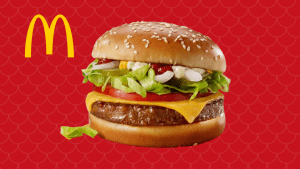 Today, McDonald’s is taking its first-ever vegan burger made with Beyond Meat – aka the McPlant – to all its outlets in the UK and Ireland.

The launch followed an exclusive event, prompting major anticipation. Then, a handful of restaurants in London got to taste the new item in a trial before it was rolled out to 250 sites nationwide.

Now, customers all over can finally lay their hands on the patty, from high street restaurants to service stations.

Co-developed with vegan meat giant Beyond Meat, the launch is part of the McPlant range.

McDonald’s confirmed it will be cooked separately from other offerings with ‘dedicated’ utensils. And the company is confident it will appeal to all customers.

It was released in ten select restaurants in Coventry on September 29. As of January 5, sites from Penzance to Grimsby and beyond.

In a statement sent to PBN, they said: “We’re so pleased that our McPlant is now officially ‘everywhere’ and available for more of our customers to taste and enjoy.

“We saw a remarkable response to the trial period back in October. And, now McPlant is on the high-street, in retail parks and service stations all over the UK and Ireland.

“So, all of our customers will be able to try it. We’re proud to once again be offering our customers more great-tasting options from McDonald’s. It’s our same iconic taste – but plant-based.”

Plant Based News Co-founder Robbie Lockie was at the initial tasting event and tried the burger first hand.

They said it was “absolutely delicious.” And, that it “tasted exactly like a traditional Big Mac burger in all the ways that most people are used to expecting.”

“We are always looking for different ways to innovate and meet our customers’ needs, and with McPlant we have a delicious plant-based burger that will appeal to everyone.

“Whether you’re vegan or just fancy a plant-based patty, we’re confident you will enjoy the McPlant.”

For the full list of restaurants the McPlant will be available in, visit McDonald’s here