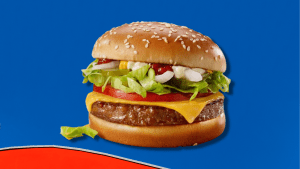 McDonald’s first-ever vegan burger, the McPlant, is arriving at a host of new locations the US next month following successful trials months ago. But, it’s likely not what consumers will be expecting…

Following a booming launch in the UK, more customers across the pond can now get a taste of the co-created Beyond Meat patty.

The fast-food giant “tested” the burger at eight restaurants as part of a ‘cautious march’ to adding more plant-based options to its menu.

The chain maintains the burger is only available for a “limited time.”

But now, it will be available at around 600 locations in San Francisco Bay and Dallas-Fort Worth.

However, unlike the meal in the UK, it is not vegan-friendly. And that’s because is it served with non-vegan mayonnaise and American cheese. The chain received criticism as a result.

Moreover, it is cooked on the same grill as beef patties and eggs.

“Guests can customize and request to hold the cheese and mayonnaise, or any other ingredients,” McDonald’s said in a statement.

Customers have waited a long time for McDonald’s to launch a vegan burger, with other giants such as Burger King and KFC leading the rush.

Earlier this month, the UK branch of McDonald’s confirmed the McPlant will arrive across all its 250 outlets.

It comes after the chain was pressed by protesters to commit to the environment and go entirely plant-based in the UK.

Despite this, McDonald’s has been praised for offering its McPlant at the same price as its famous Big Mac.

The post McDonald’s Extends US Availability Of Beyond Meat McPlant Burger appeared first on Plant Based News.