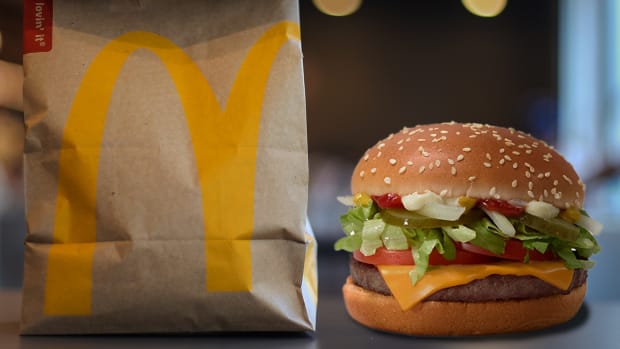 The fast-food giant has tried healthy before, and it failed.

McDonald's (MCD) - Get McDonald's Corporation Report wants customers who care about healthy eating, and it wants options for its existing customers when they want a meal that's healthier than a Big Mac or a 10-piece Chicken McNuggets.

The business logic for this makes sense -- some people want to eat healthy food -- but the reality has never proven that anyone wants healthy choices from McDonald's. McPlant might be different, but the fast-food giant has gone down this road before and the ending has always been the same.

McDonald's dropped all of its salads during the pandemic. That happened as part of an effort to streamline the company's menu -- which made sense during the time when the chain's dining rooms were closed and all orders were delivery or drive-through -- but they have not returned to its menu even though operations have returned to (somewhat) normal.

The reality is that people looking to eat healthy don't choose McDonald's. Salads might be attractive to adults who take their kids to the fast-food chain, but that's a very limited audience.

"According to food research firm Technomic, 47% of Americans say they want healthier restaurant options, but only about 23% actually order them. So Wendy's, Burger King and McDonald's can offer all the apple slices and plain baked potatoes and yogurt parfaits they want, but despite what customers say, these items aren't selling," Huffpost reported.

That same article also noted that salads only accounted for 3% of the chain's sales before they were discontinued.

Adding a plant-based burger brings McDonald's good publicity. The chain, however, has been very careful in how it has rolled out the Beyond Meat (BYND) - Get Beyond Meat, Inc. Report sandwich option. It started the test in a handful of stores and plans to bring it to 600 locations in mid-February.

Chains often test new products in a small number of stores then increase availability. That's sort of what's happening here, but McDonald's has also taken every chance to tout its efforts because offering a plant-based burger option brings good publicity while quietly dropping it when nobody wants it -- as Dunkin' did with its Beyond Meat sausage sandwich -- barely gets noticed,

"The McPlant includes a plant-based patty co-developed with Beyond Meat that’s exclusive to McDonald’s and made from plant-based ingredients like peas, rice, and potatoes. The patty is served on a sesame seed bun with tomato, lettuce, pickles, onions, mayonnaise, ketchup, mustard, and a slice of American cheese," the company touted in a press release.

In addition, it's important to note that the McPlant won't appeal to many people who don't eat meat for a reason the chain probably can't correct.

"It’s also cooked on the same grill as meat-based products and eggs," the company shared.

That makes the McPlant a plant-based sandwich for non-vegetarians. (It's already not a vegan-friendly product as it comes with cheese and mayonnaise, though it can be ordered without those). That's a very small audience  -- probably fewer people than might have eaten a McSalad -- and it makes McPlant a product that's not likely to succeed if you base success on sales, not media attention.