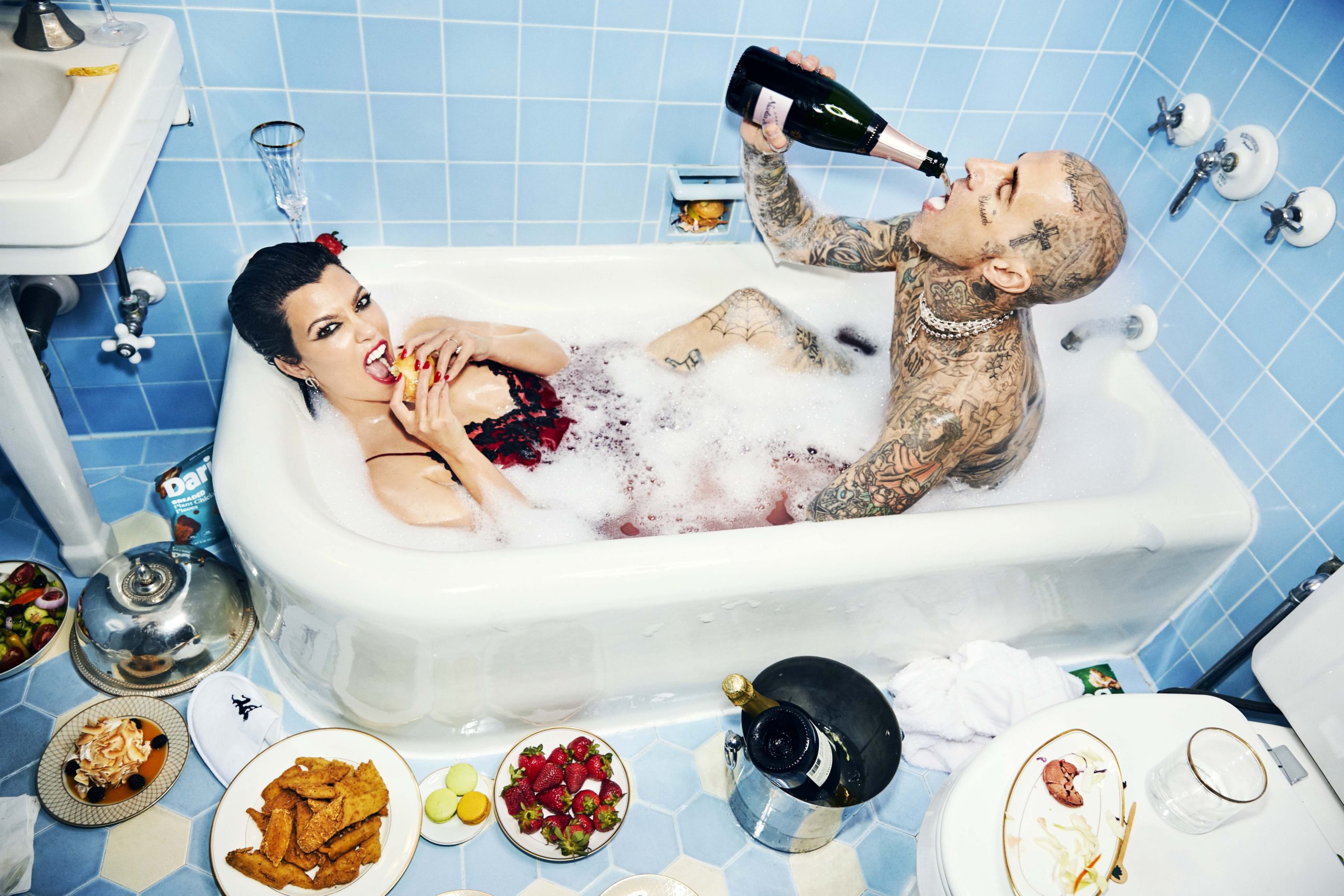 Kourtney Kardashian-Barker and Travis Barker have starred in a promotional campaign for plant-based chicken brand Daring Foods. The campaign was conducted by notable fashion photographer Ellen von Unwerth and tells the story of lovebirds tucking into animal-free fried chicken during a night out in West Hollywood. Unwerth went on to shoot Kardashian and Barker’s official Italian wedding.

The images were shot two days after the celebrity duo eloped to Las Vegas for the first of three weddings held this year. Barker has been vegan since escaping death in a plane crash in 2008. Kardashian claims to be 90 percent vegan and has been regularly depicted on her family’s reality series talking about healthy foods and meat-free eating. She founded the Goop-ish media and e-commerce platform Poosh, which regularly posts about her commitments to mindful eating.

Kardashian and Barker gained notoriety during their courtship for frequent public displays of affection and unabashedly intimate behaviour. They have continued this theme in their partnership with Daring. The images released show the pair in various states of undress, devouring Daring chicken straight from a bucket, a room service trolley, and a hotel mini-fridge. The location was the penthouse suite in the Chateau Marmont hotel.

“From the moment our partnership with Kourtney and Travis began there was clear synergy between Daring’s mission and their personal beliefs on plant-based eating and the positive impact it has on the environment,” Ross Mackay, Daring’s founder and CEO said in a statement. “I could not be more proud to partner with them for Daring’s latest campaign and am grateful for their support and genuine love of our Plant Chicken.”

Daring sets itself apart from competitors by focussing on its clean label, short ingredients list credentials. Last October, the brand closed a $65 million Series C raise, bringing its 12-month funding total to $120 million. It secured support from celebrity backers including Naomi Osaka, Steve Aoki, and Chase Coleman, illustrating it already found popularity with influential figures. Welcoming Kardashian and Barker on board as ambassadors doubles down on this.

Travis Barker is an investor in Los Angeles vegan restaurants Crossroads Kitchen and the In-N-Out style burger chain, Monty’s. The latter has just launched Daring Plant Chicken Tenders in all of its locations, making the new promotional images a seamless tie-in.

“I haven’t eaten meat since I was 13 years old, so really good plant protein is important to me. Daring is awesome, because it’s super clean and has all-natural ingredients.” Barker said in a statement. “When I went fully vegan 15 years ago, the options were basically straight vegetables, so I’m excited to see more plant-based choices on menus – That’s why I invested in Crossroads Kitchen and Monty’s and why this partnership with Daring felt so right for Kourt and Me.”

For her part, Kardashian has commented that she finds the Daring chicken comparable to conventional protein and is keen to find clean label alternatives to feed her children.

The Daring campaign comes after Kim Kardashian starred in a campaign as Beyond Meat’s “chief taste consultant.” The reality megastar has lent her influence and endorsement to the brand, claiming to have used the products at home for some time. She appeared in a video, promoted across social media, in which she tastes a range of the brand’s meat alternatives, declaring all of them delicious and asking viewers to consider swapping to plant-based alternatives. Kardashian joins the likes of Snoop Dogg, Leonardo DiCaprio, and Kevin Hart in her role as a Beyond ambassador.