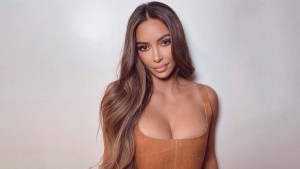 Kim Kardashian says she takes Beyond Meat with her wherever she travels.

The reality TV star made the comment in a recent video for Poosh – her sister Kourtney’s online lifestyle brand.

Kim made Beyond Beef vegan tacos alongside Tracy Romulus – and praised the plant-based brand for its nutritional content.

“The thing I really love about Beyond Meat is it has zero cholesterol – that’s like crazy in comparison to real meat,” Kim said.

“And, it has a third less of the saturated fat. So, there is a big difference: it’s just a plant-based alternative that looks like meat, tastes like meat – I’m such a fan.”

The celeb also said she will bring a container of food including Beyond Meat wherever she goes so she can start ‘cooking it herself’.

Kim also spoke about her journey to a more plant-based diet, which she has showcased on social media throughout the years.

When asked why she started eating more plants, Kim said: “I think I watched a documentary on it.

“I didn’t do it religiously – only when I was at home. I just met chefs that loved to cook plant-based and were teaching me so much about, like, sea moss and all of these amazing food that have these really good health benefits.

“So, I would always say I’m plant-based when I’m at home but I’m not plant-based if I go to a restaurant like I can’t control myself.

“Then I stopped, I got over it. Maybe a year later, I got reintroduced to it. I think I tried something that was just really good and it was plant-based.

“Luckily, I have the help of amazing chefs that have figured out how to find the things I love and make a plant-based version of that.”

Kim added that she never wants to be a ‘hypocrite’ and said there may be times where she still consumes animal products in the future.

The post Kim Kardashian Says She Takes Beyond Meat Wherever She Travels appeared first on Plant Based News.