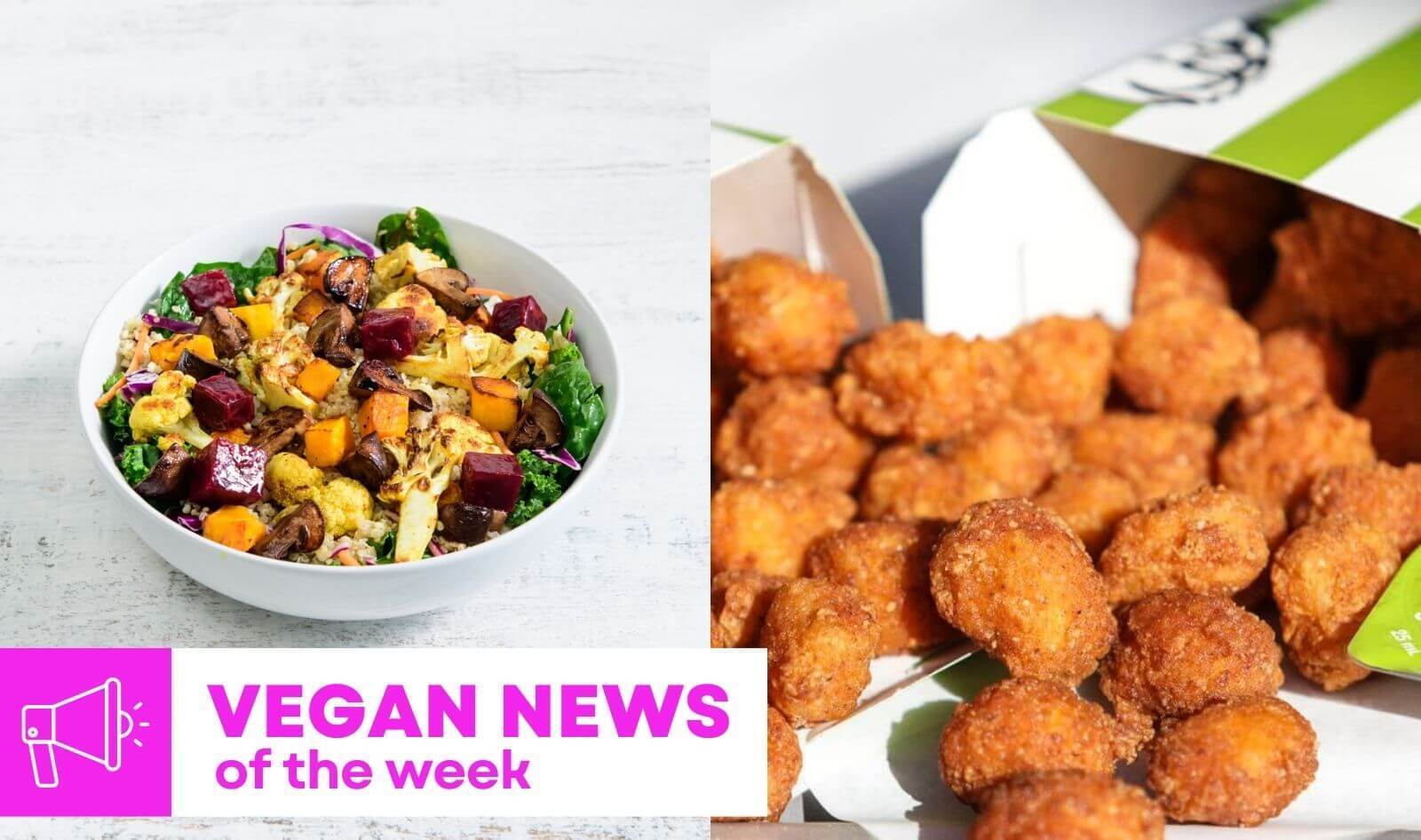 It seems that every week in the world of vegan food news is more exciting than the last and this week is no exception. KFC is testing plant-based popcorn chicken in new regions. Veggie Grill is launching a new concept, Vegan Bowls For All, with hearty bowls inspired by global cuisines. And Trupo Treats is launching the world’s first gluten-free and vegan wafer bar (aka a KitKat copycat). Read on for more.

KFC was a wasteland for vegans up until a few years ago when the chicken-centric company got into plant-based chicken for the first time in the United Kingdom, where it introduced a Quorn-based vegan chicken burger in 2019 which has since gained a dedicated following. KFC also tested vegan chicken in its home market, the United States, with Beyond Meat as its vegan chicken partner.

Called Wicked Popcorn, the vegan chicken is made from pea protein and will be on the menu à la carte, in a bowl, and as part of a combo meal for a one-month run (until September 5) and is coated in the same spices as its meat-based Wicked Wings.

“We’re excited to serve up Wicked Popcorn—an innovative product that offers more choice on our menu,” KFC Australia spokesperson Sally Spriggs said in a statement. “We hope they’ll enjoy this meat-free option which offers that great KFC taste our fans know and love.”

Representing the first time that KFC has added vegan chicken to its menu anywhere in Australia, the chain is taking extra precaution to let consumers know that Wicked Popcorn may share the same equipment as its animal-derived chicken.

2Veggie Grill gets into vegan bowls

Veggie Grill is like that trusted friend that always comes through and the vegan fast-food chain is launching a new way to support your vegan food needs. Enter Vegan Bowls For All: a delivery-only concept that operates out of the kitchens at all 29 Veggie Grill locations. The menu here revolves around six nutrient-packed composed bowls: Cali-Grains Bowl, Korean Kimchi Bowl, Chickpea Curry Bowl, Thai Coconut Curry Bowl, Harvest Bowl, and Ranchero Bowl.

Vegan Bowls For All

“We wanted to introduce convenient and affordable options designed for consumers to optimally nourish themselves while supporting the health of the planet at the same time,” Veggie Grill Co-founder T.K. Pillan told VegNews. “Our mission is to provide 100-percent plant-based food that satisfies cravings and moods of all kinds, and Vegan Bowls For All fortifies that mission.”

Bowl lovers will be able to order from Veggie Grill’s new Vegan Bowls for All concept starting August 17 for delivery through DoorDash, Postmates, Uber Eats, and Grubhub during lunch and dinner hours.

3Hooray’s vegan bacon is on the move

Amid the raging California wildfires of 2019, Sri Artham faced his angst around the climate crisis head on: by creating vegan bacon that is better for the environment and kinder to pigs than animal agriculture. Since its launch in November 2020, the company has sold 4.2 million strips of vegan bacon and Hooray Foods is not stopping its growth and innovation any time soon.

“Since our debut in late 2020, we’ve been focused on reaching meat-eaters and flexitarians because they are a key demographic in driving our mission of creating a healthier planet going forward,” Artham said in a statement. “Taste has always been the greatest barrier to people trying plant-based meats, so from the moment our original bacon hit stores, we knew there was more work to be done.”

This week, Hooray’s bacon expanded its distribution to 100 locations of Raley’s family of stores across Northern California and Nevada under their Raley’s, Bel Air, and Nob Hill Foods banners. In Massachusetts and Connecticut, 46 Big Y stores now feature a retail pack of Hooray Foods bacon in its plant-based frozen section. And Grocery delivery service Good Eggs is also offering Hooray’s vegan bacon to customers across the San Francisco Bay Area and Los Angeles. With this expansion, Hooray’s vegan bacon is now available at more than 1,000 stores.

KitKat but make it vegan but also make it gluten-free? According to Trupo Treats, a confectionary brand making vegan versions of all our childhood favorites, this isn’t too much to ask.

Founded by twin brothers Brian and Charlie Trupo, the newest creation from the brand is Vegan Wafer Bars, which are made to resemble KitKats but are free from common allergens, including gluten, nuts (with the exception of coconuts), and dairy. The first and only vegan and gluten-free wafer candy bar, the treat is made with Rainforest Alliance-certified cocoa and comes in a recyclable wrapper.

The new Vegan Wafer Bars are available for pre-order starting today through Trupo Treats, which has also veganized other childhood favorites such as Rice Crunch Bars in white and “mylk’ chocolate (think Nestlé’s Crunch Bar); Mylk Chocolate Caramels (like a giant Rolo or a rounder Caramello); and more.

Since animals are the brothers’ biggest motivation, the company donates a portion of its sales to animal sanctuaries and charities working to help animals. Trupo Treats has donated $10,000 since it began operations in the summer of 2020 and the brothers hope to donate at least $1,000,000 every year.