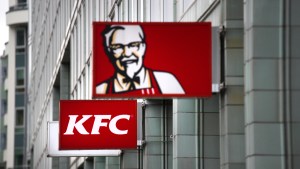 Kevin Hochman, the US president of KFC, has revealed plans to veganize the fast-food chain’s iconic Kentucky Fried Chicken. He revealed the company’s plans in a major recent interview

And it comes as demand for plant-based meat options continues to soar, with Hochman saying KFC plans to recreate the taste ‘as close as we can’.

‘Our plan is to try to replicate that Kentucky Fried Chicken as close as we can, obviously without using the animal. A lot of that is about how the chicken cuts and tears and the mouth feel.

The gold standard is the chicken tenderloin or chicken strip’, Hochman told Bloomberg.

And, the firm plans to replicate chicken tenderloin with muscle fibers to achieve the tear of the real thing.

Moreover, Hochman revealed he eats plant-based burgers at home because they’re ‘as good’ as their meat counterparts.

KFC is yet to confirm when customers will be able to taste its new iterations. However, it comes at a time where the plant-based meat market is expected to skyrocket – soaring past $162 billion within the next decade, according to a new report.

Hochman backs this and said the company believes the market will continue to grow ‘over time’.

However, he said he doesn’t think it’ll ever be the majority market. ‘It’s never going to replace animal protein’, he added.

Since revealing plans it was working on a vegan chicken burger in 2019, a UK release arrived at the start of 2020.

Additionally, the brand has worked alongside vegan meat giant Beyond Meat to trial plant-based nuggets in California, US.