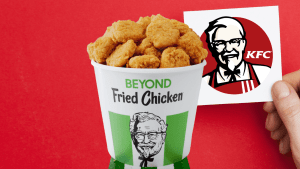 The once-niche meat-free food sector just took another step into the mainstream. Fast food giant KFC – known for its very meat-heavy menu – has paired up with vegan brand Beyond Meat once again. Together, they are rolling out Beyond Fried Chicken to all KFC stores in the US.

The two companies have linked up a handful of times in the past, trialing meatless chicken in Atlanta, Georgia, in 2019 and in a handful of other cities the following year.

Beyond Meat and KFC have made a “few tweaks” to the product since then, KFC US’ president Kevin Hochman told CNN Business.

And now, according to Hochman, “it’s time.”

Is KFC’s Beyond Fried Chicken vegan?

The new Beyond Fried Chicken is “packed with delicious flavor and the juicy satisfaction that you’d expect from KFC’s iconic fried chicken,” the fast food titan said in a press release.

Hochman noted that “the taste is so good that [customers] might choose it over regular fried chicken.”

While the recipe itself is completely plant-based, KFC is not advertising the offering as vegan or vegetarian since it is prepared in the same area as animal meat.

Instead, the chain hopes the meatless option will draw in those who are looking to limit their animal product intake, for health or sustainability reasons.

Hochman hinted at the launch in September, telling Bloomberg that “we don’t think that plant-based is a fad, we think that’s something that’s going to continue to grow over time.”

“I eat plant-based hamburgers at home now because I think they’re as good as the regular burger,” the entrepreneur revealed.

KFC is certainly not the first to explore the meat-free food space. Burger King introduced the Impossible Whopper in 2019, made alongside plant-based food brand Impossible Foods.

And last year, McDonald’s trialed a vegetarian McPlant burger in the US. Wall Street analysts predict it will be available nationwide by late spring 2022.

Notably, as of today, McDonald’s launched the McPlant, complete with dairy-free cheese, at all of its locations in the UK.

Beyond Fried Chicken will be available at KFC stores nationwide from January 10, 2022, for a limited time.

The post KFC Brings Beyond Fried Chicken To 4,000 Stores Across The US – But Is It Vegan? appeared first on Plant Based News.