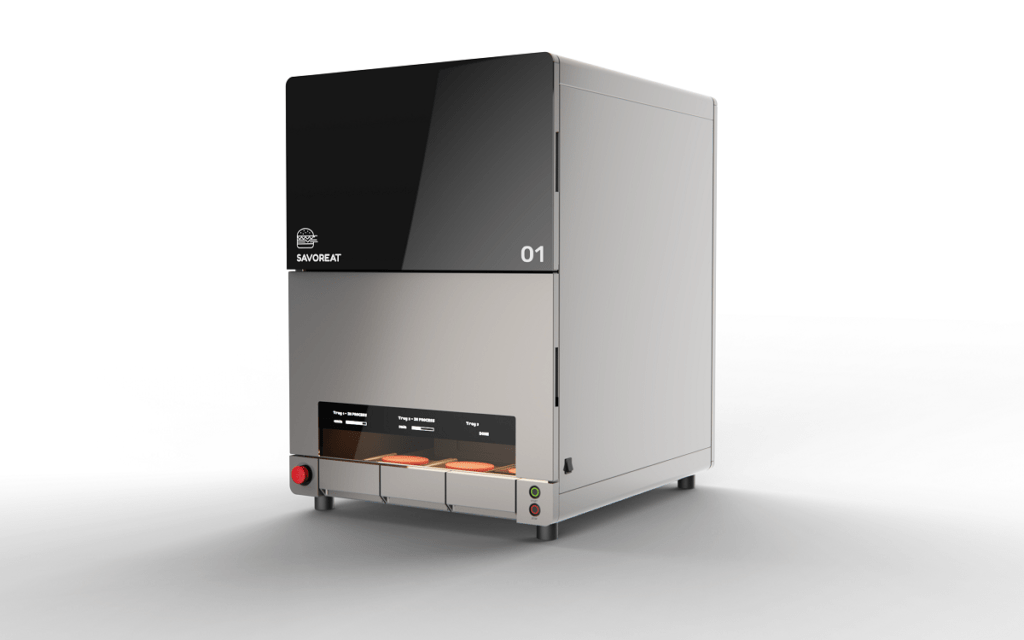 Just days before the world rang in the New Year, Israeli-based food tech firm SavorEat unveiled its 3D printing “robot chef” – which can whip up burgers and steaks in just six minutes – at popular Israeli food chain BBB in Herzliya.

The robot chef is a 3D printer that resembles an oven and customizes burgers to a customer’s taste, with variations in protein, oil, texture, and ingredients.

The burgers are made from a mix of potato, chickpea, and pea protein, according to SavorEat CEO Rachel Vizman, who co-founded the company with Prof. Oded Shoseyov (Chief Scientist), and Prof. Ido Braslavskof The Hebrew University of Jerusalem in 2018.

SavorEat first announced a partnership with BBB in January. The company said at the time that it would offer their meat alternative burgers at their restaurants for a price that is similar to existing vegan options.

During the event at BBB last week, SavorEat invited guests to order veggie burgers at BBB through a mobile app, which gave them the opportunity to choose their own personal specifications for the burger including the level of fat and protein content, the size of the patty, and the temperature for cooking. Then they were able to watch the burger being made from scratch.

SavorEat develops plant-based meat alternatives using proprietary ingredients. The products are created and cooked by a robot chef according to the user’s exact preferences. They are created to be as close as possible to meat in texture, flavor, and experience.

Vizman said they wanted to present their clean meat burgers to the public because “we believed that the food industry is in need of significant changes in order to remain relevant.”

The company said its “robot chef technology” is designed to change the balance of power between the food industry and consumers by allowing the consumer to control the food production process and the served meal. The robot chef, allows digital production at the catering points (on-site) according to the customer’s requirements and desires without compromising on taste and quality.

“We choose to boldly look at the changes of our future and to challenge the status quo in the food industry. Through the technology we have developed, we will be able to get to know our customers better, respect them and give expression to their changing needs. Now is the time for change, and it is more fitting than ever,” Vizman added.

The meat alternatives produced by the robot chef within a few minutes are made in a closed system (without human touch) and are designed to exclude allergens, products of genetic engineering or gluten, while preserving high nutritional values ​​and without compromising the familiar eating experience of meat (both in taste and texture). Along with meeting the needs of the end-consumer, the communication between the customer, the catering chain and the robot is performed by an application that stores data in a secure way on the cloud – a feature that allows great flexibility in updating recipes, remote control of the robot on the one hand, and collecting relevant consumer and business information on the other hand.

The BBB group will market SavorEat’s hamburger and its technological solution for several weeks at designated locations throughout the country. BBB group was established over 20 years ago and runs a franchise with several different chains at 100 locations and restaurants across Israel, including: BBB, Moses, Burgerim, Moses Shop and the Meat Deli delicatessen chain.

SavorEat in the US

“As the world sets its sights on a post-pandemic horizon and the global goal of net-zero emissions, investors are quickly realizing that climate risk is investment risk, making sustainable solutions for protein production attractive for reasons that extend far beyond the bottom line,” Maia Keerie wrote in a post for the GFI blog.

In one of Israel’s biggest funding rounds of 2021, Israeli clean meat startup Future Meat raised $347 million, the largest investment in a cultured meat company to date.

Meanwhile, SavorEat has set its sights on commercializing its plant-based meat in the US. The Rehovot-based company has signed a deal with the US subsidiary of French food services and facilities company Sodexo to launch a pilot program in the US.

As part of the program, Sodexo will examine SavorEat’s robot chef system and its first product, a plant-based burger, within higher education institutions across the US. The two companies are also working on reaching an agreement for the distribution of SavorEat products.

Vizman told NoCamels in September that the pilot is the first step towards the company’s plan to be commercial by 2023 and launch its solutio within the food service market in the US. The pilot is expected to go into effect in 2022.