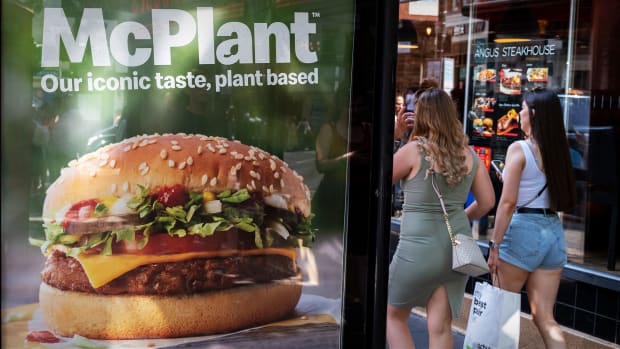 The alternative meat burger has been in a protracted test period since 2021.

The short answer is "no one knows." The veggie-based burger, which has been available at global franchises for years but would be a first for McDonald's  (MCD) - Get McDonald's Corporation Report in the U.S., has been riddled with questions ever since the chain first started hinting at the McPlant in 2019.

By November 2021, the Golden Arches began testing the McPlant in a few select restaurants and rolled out the trial to 600 locations by 2022.

Despite the fact that McDonald's was already years behind competitors like Wendy's  (WEN) - Get Wendy's Company (The) Report and Restaurant Brands International  (RBI) 's Burger King when it comes to having a plant-based burger, the trial period was lengthy and full of promises of an "iconic McDonald's burger" without actually launching it nationwide.

"The patty is served on a sesame seed bun with tomato, lettuce, pickles, onions, mayonnaise, ketchup, mustard, and a slice of American cheese," the company said in a press release back in 2021. "It has the iconic taste of a McDonald’s burger because it is."

Is The McPlant Finally McOver?

In its latest earning call for the quarter ending in June 2022, McDonald's chief executive Chris Kempczinski talked about inflation (the chain recently raised the price of its cheeseburger in the United Kingdom for the first time in 14 years) but avoided touching on the McPlant.

The company later confirmed to CNBC that the test period had "concluded as planned" without actually specifying whether the whole idea was scrapped or not.

Stock of Beyond Meat  (BYND) - Get Beyond Meat Inc. Report, the vegetarian patties used in the McPlant, immediately tanked by more than 6% immediately after the announcement was made. The alternative meat maker has already had a rough year, falling by nearly 52% since the start of 2021.

So how did things get to a McPlant being rolled out to great fanfare to the gradual fizzling out of a veggie burger that, for most fast-food chains, has long been a core part of the menu?

An early report from BTIG analysts Peter Saleh and Ben Parente found that the McPlant was only selling about 20 sandwiches per day in many test markets in California and Texas.

"For McPlant to be more ubiquitous, the price point needs to be more competitive with traditional burgers, and the health and climate benefits need to have greater emphasis," Saleh and Parente wrote in March 2022.

The failure may also be because the U.S. mostly still associates McDonald's with both indulgence and tradition and may be less likely to try a vegetarian burger.

The McPlant's lack of popularity should not, however, be used to discount the growing demand for alternative meat and cheese options.

While early players like Beyond have been struggling to set themselves apart as a host of new competitors crowded in, the plant-based market is still expected to grow at a CAGR of 19.3% by 2030 as more and more people in Western countries try to minimize meat consumption for both health and environmental reasons.

In the U.S., most still associate McDonald's with both indulgence and tradition and may be less likely to try a vegetarian burger.

Past efforts to give itself a healthier rebrand, such as short-lived salad shakers in 2000 and Premium Salads in 2003, have also not be fruitful for the company

The McVeggie, a corn-and-pea patty that launched in 2012 when McDonald's opened its first vegetarian-only restaurant in India, is a part of the main menu in New Zealand, Australia, Switzerland, and Hong Kong.

The global alternative meat market is expected to reach $24.8 billion by 2030.