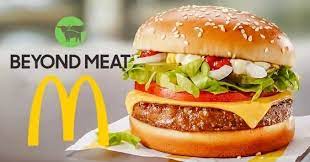 Since its start over 10 years ago, Beyond Meat (BYND) has emerged as the leader in plant-based meat alternatives. The vegan meat company’s product line can now be found in more than 80 countries in 122,000 retail and food service locations. After its May 2019 IPO launch, BYND stock rocketed 859% to all-time highs a few months later.

News of a big distribution deal in January provided a temporary boost for Beyond stock. But is BYND stock a buy now? It’s key to analyze the vegan meat company’s fundamental and technical picture first.

Beyond’s retail sales were up, but those gains were offset by drops in its U.S. food service sales. The company said those trends were similar across international markets. However, CEO Ethan Brown added on the May 6 earnings call that he expects a “slow and steady thaw” of those depressed sales numbers as Covid reopenings take effect.

“We are encouraged by the trends we saw in Q1 revenue,” he said. “Retail net revenues led to our growth, increasing 45% year over year. And although food service net revenues were down 34% versus the prior-year period, this sector appears to be showing directional early signs of recovery from Covid-19.”

“We are making a series of investments here in the U.S., in the EU, and in China to be in a position to serve customers and consumers alike,” Brown said. He added that the company’s focus on “three key levers of taste, health, and cost” will enable a runway for growth when it comes to mass adoption.

BYND stock is in a downtrend, but it’s seen temporary boosts alongside partnership announcements. Shares soared nearly 20% on Jan. 26 after news of a partnership with PepsiCo (PEP) to produce healthy, protein-filled snacks.

The deal is Beyond Meat’s potentially most far-reaching partnership to date. It would give the company access to new distribution channels.

The Pepsi agreement is the latest marquee partnership for Beyond Meat. The vegan meat maker announced a deal with Yum Brands‘ (YUM) Taco Bell on Jan. 14. Announcements of both those partnerships helped BYND stock surge 42% in the month of January.

Fast-food giant McDonald’s (MCD) announced it would begin offering McPlant menu items made with Beyond products last November. The expansion of McDonald’s vegetarian menu options comes after a test run in Canada with Beyond Meat products.

Beyond Meat’s expansion plans include other retail locations as well. CEO Brown announced on the Nov. 9 earnings call that Beyond Burger would be available at 7,000 CVS (CVS) locations nationwide in January 2021.

Beyond Meat Expands To China

Additionally, Beyond Meat said on Sept. 8 it’s building production facilities near Shanghai, China. This makes Beyond the first foreign vegan meat company to set up operations in the country.

Beyond Meat announced the grand opening of its first production plant in China on April 7.

The Shanghai-based production facility is key to growing Beyond Meat’s presence in the Chinese market. BYND stock views the region as a significant part of the company’s long-term growth strategy.

The opening of the China-based production facility comes after the launch of a new e-commerce site for Beyond Meat. The platform allows consumers to purchase vegan meat products directly from the company.

“In Asia, our goal of establishing a production footprint before the end of 2020 remains on track,” Brown said. “We believe the magnitude of the opportunity in Asia merits significant investments, and we will continue to proceed with a sense of urgency appropriate for the challenge and opportunity alike.”

Though plant-based meat substitute is a relatively new industry, Barclays analysts last May projected sales of vegan meat could hit $140 billion in the next 10 years.

Beyond Meat’s most notable rival is privately owned Impossible Foods. In addition to successful restaurant partnerships that include Burger King (QSR), the Northern California-based company also has aggressively expanded its own retail footprint during the pandemic.

Impossible Foods has grown its grocery retailer roster, which includes deals with Walmart and Albertsons (ACI).

The country’s largest meat producer, Tyson Foods, also entered the vegan meat space in 2019. Tyson sells plant-based meat in the form of nuggets and blended protein alternatives through its Raised & Rooted label in more than 7,000 stores across the U.S.

To determine whether BYND stock is a buy now, fundamental and technical analysis is key.

The IBD Stock Checkup tool shows that BYND stock has an IBD Composite Rating of 2 out of a best-possible 99. The rating measures a stock based on the most important fundamental and technical stock-picking criteria. IBD research shows some of the greatest stock winners of all time often have a Composite Rating of at least 95 near the start of big runs.

The Composite Rating looks at earnings and sales growth, profit margins, return on equity and relative stock price performance, among other metrics.

BYND stock has an EPS Rating of 7 out of 99. The EPS rating compares a stock’s quarterly and annual earnings-per-share growth with that of all other stocks.

This group currently is ranked a weak No. 172 out of the 197 industry groups IBD tracks. Investors should focus on stocks in the top quartile of IBD’s groups.

BYND stock made its Nasdaq debut in May 2019 at 25. Shares of Beyond Meat quickly made a strong move in the following three months.

Beyond Meat stock hit an all-time high of 239.71 in July 2019. But then BYND began declining almost as quickly as it climbed.

Fast forward to 2021, and Beyond Meat stock tried to rebound on news of partnerships with Taco Bell and PepsiCo. Shares powered above the 150 price level on Jan. 25, clearing a short, handle-like consolidation. This move could have been viewed as an early entry point for aggressive investors.

But the 200 price level was a resistance area for the stock. Though shares of Beyond Meat gapped up on the PepsiCo partnership, the stock had a weak first five-minute bar that day, and closed near the low. That’s weak action.

Shares quickly filled the gap, which is another negative sign. When a stock gaps up, it’s ideal to see it hold that gain. That’s a signal of power and institutional support.

Beyond Meat stock is now well below its 10-week line and 40-week line. With shares some 53% below 52-week highs, BYND stock needs time to trend higher and form a new base.

Beyond Meat Stock: Is It A Buy Right Now?

The long-term outlook for plant-based meat looks compelling, and Beyond Meat is seeing a rebound in the food-service market. Forward-looking earnings estimates are encouraging, but the chart’s technical picture has worsened.

Bottom line: BYND stock is not a buy right now. Though the PepsiCo-fueled gap-up in late January seemed compelling, shares quickly fell to the bottom of their trading range and have now filled the gap and more.

Investors can keep an eye out for the development of a new proper entry. But given the technical damage to the chart, that could take a while.

To find the best stocks to buy and watch, check out IBD’s Stock Lists page. More stock ideas can be found on our Leaderboard and MarketSmith platforms.

These Are The 5 Best Stocks To Buy And Watch Now

Find Compelling Growth Stocks With IBD’s Stock Of The Day

Catch The Next Big Winning Stock With MarketSmith

The post Is Beyond Meat A Buy Amid Pepsi, McDonald’s Deals? appeared first on editorpen.