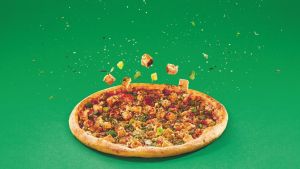 Quorn and Pizza Express worked together for two years to develop the product. The companies describe the pizza as ‘iconic’ on their social media pages.

The pizza chain – which has more than 470 restaurants across the UK and 100 more in other countries – now offers 15 vegan mains.

The plant-based options include Funghi Di Bosco Romana, Pea and Asparagus Risotto, Leggera Giardiniera, and Padana Romana, among others.

Domino’s restaurants in the UK serve vegan chicken nuggets and pizzas. And Papa John’s has more than 10 vegan options, including the meaty Vegan Works, cauliflower Buffalo wings, and vegan cheese and Marmite scrolls.