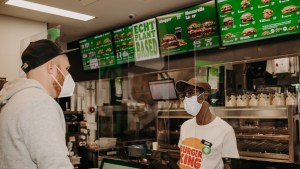 A Burger King store witnessed huge queues gathering outside after it hosted a plant-based takeover.*

One of the fast-food chain’s outlets in Cologne, Germany, ditched meat from June 7-11.

In what has been described as a ‘world’s first’ – the store sold exclusively meat-free versions of its whopper and Chicken Royale burgers, as well as plant-based nuggets. All vegan meat served was created by The Vegetarian Butcher – a Unilever-owned brand that partnered with Burger King last year. Pictures from social media show the restaurant’s exterior undergo a green makeover. Posters stating: ‘100 percent taste, 0 percent meat’ were displayed outside and inside the store.

‘The burgers were delicious’

“I was there today. It was really busy, people were standing outside,” one social media user wrote on Facebook. “The burgers were delicious and tasted like the original. Thanks also to the great staff, who kept a clear head despite this rush and did a great job.” Commenting on the success of the pop-up, Burger king Deutschland said: “Thank you cologne! “Thanks to the many, many enthusiastic guests. And especially thanks to our super team from the Plant-based Burger King Restaurant. “For the past five days, you’ve been plant-based whopper and co. [You’ve] Made a lot of guests happy! Big shout out to all of you. You are simply plant-astic!” *While all meat served during the meat-free takeover was vegan. Some items contained cheese and mayonnaise. The post Huge Queues Gather After Burger King Store Hosts ‘Plant-Based’ Takeover appeared first on Plant Based News. plant-based vegan meat plant based nasdaq-bynd meat chicken cheese butcher burgers burger