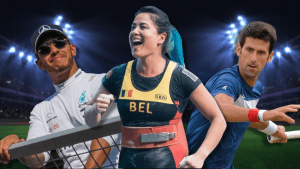 This past year has seen some incredible wins from athletes sporting plant-based diets or complete vegan lifestyles.

From the snowy peaks of Italy to stretches of British countryside, and of course the Tokyo Olympics podiums, the spotlight on the benefits of the movement has never been quite so bright…

This includes the first vegan cruiserweight title in the World Boxing Organization, and Lewis Hamilton becoming the first-ever driver to scoop 100 Formula 1 wins.

These meatless sporting heroes have also been making moves behind the scenes too.

There was Héctor Bellerin‘s sustainable clothing collection with H&M, as well as multiple vegan investments from Venus Williams.

Looking back on the highlights, here are some of the most notable slam dunks in sport this year.

Many of this year’s outstanding performances are at least partially, as the stars explain themselves, due to peak physical fitness achieved on a plant-based diet.

Early on, Novak Djokovic revealed being plant-based had allowed him to achieve world No. 1 status. It’s definitely working for him as this year he won his 19th Grand Slam title.

Moreover, American pro basketballer Diana Taurasi was given the greatest player of all-time status. “I think [veganism] is something I have really benefited from,” she said.

Relying on animal products is far from necessary in the CrossFit world, too. The three top scorers in a German competition this year were Lidia Bartoszewicz, Katharine Isele, and Lisa Eble.

“There are enough vegetable proteins that have made me quite fit,” Eble explained.

Vegan athlete Kate Strong further proved this when she smashed three Guinness World Records in just 24 hours. “I want to set records that never existed before, in a field where female participation is stark in comparison to male,” she said.

The year kicked off in spectacular style as sporting icons took to social media to shout out about the benefits of the movement.

He cited ethical reasons for helping make the switch and urged people to watch documentaries that expose the horrors of factory farming.

Similarly, it was hit Netflix documentary Seaspiracy that prompted former cricketer Kevin Pieterson to call on his millions of fans to ditch meat, fish, and dairy.

Rugby player Dan Bibby, the bearer of a silver Olympic medal, even worked to educate his teammates on reducing their meat consumption. For him, it was about the environment.

Elsewhere, it is about improving accessibility. NBA’s Chris Paul pledged to bring plant-based foods to more Black-owned businesses in light of this.

How athletes are transforming businesses

While he’s not vegan himself, acclaimed footballer Dele Alli used his platform – and sizeable salary – to boost the profile of vegan chicken brand, TiNDLE this year.

Across the spectrum, Venus Williams, a vegan for over a decade, became an ambassador for the vegan marketplace PlantX.

She also expanded her own plant-based protein offerings this year, under the Happy Viking brand. Here, she rolled out a host of new superfood flavors in a bid to help more people experience the benefits of plants.

It followed a major interview where the Grand Slam star and former world No. 1 explained how going plant-based “changed my life.”

Plant-based progression on this scale, from athletes themselves, can certainly be hailed as a helper in extending the movement from the audience seats and beyond.

Just last month, a deal was announced between tennis hub Wimbledon and Chelsea Football Club in the UK that would see thousands of vegan burgers and hotdogs served in the stalls.

The post How Some Of Sport’s Greatest Athletes Propelled Veganism In 2021 appeared first on Plant Based News.