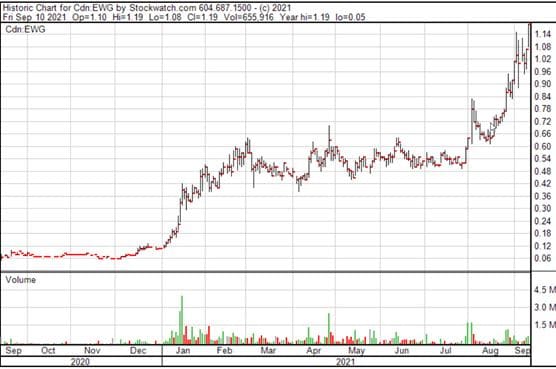 Eat Well Group (EWG-CSE) is now more than a double for Investing Whisperer subscribers in just a few months.

I think the stock has the potential to go much higher (Prince bin Alwaleed just joined the advisory board), but I bring it to your attention now because it’s a good case study in—one of the ways—I find triple digit wins here at InvestingWhisperer.

Eat Well was—in an oblique way—similar to how I have found a lot of my winners in the last two years. (There are over 40 closed triple digit trades in the 2021 portfolio right now.)

I made most of my money in 2020 buying “meme” stocks, and my timing was exceptionally lucky—especially with the Green Trade, or the ESG Trade.

Stocks like Nano One (NANO-TSX/NNOMF-PINK), Vicinity Motors (VMC-TSX/VEV-NASD), Greenlane (GRN-TSXv) and Neo Lithium (NLC-TSX/NTTHF-PINK) were 3- and 4-baggers for me within weeks to months.

I did the same in crypto stocks, buying Voyager Digital (VOYG-TSX/VYGVF-PINK) at $1.81 late last year—it then rocketed up to $36 in months! (I took profits all the way up to $28).

While I do have a couple people helping me research some fundamentals in the small and micro-cap space—that’s not always possible.

Sometimes it’s MORE important to know who the people are in company. People are the most valuable commodity. Who are the large, behind-the-scenes shareholders who either have a great track record themselves in creating successful stocks? Or who is incredibly well connected to other investor groups and market makers.

You see, there is a formula for mgmt teams to build successful companies. They must find industry and market investors who have contacts/networks that can help bring attention to the company at each stage of its growth…and get it financed.

You have probably all read a research report from a brokerage firm that says—’hey, this company right here—it’s cheap compared to its peers and it has very similar metrics’. But of course what these reports can’t say is that these companies trade cheaper for a reason—almost always it’s management reputation. It’s what I call “the intangibles” in a valuation.

The Market will—almost always—give the Rock Star management team—who have made shareholders millions before–a bigger valuation. I saw it for years in the oil and gas space in Canada. But it’s true in every sector I’ve researched.

This…intangible…reputation…thing is impossible to gauge accurately; you can’t put a specific metric on it. But over the decades I’ve realized the Market is paying a premium because they know that team can do BIG DEALS—change the company overnight.

When my network first alerted me to Eat Well (it was then trading as Rockshield Capital), they had just announced their foray into plant based foods. This was an…OK…meme play. Obviously Beyond Meat (BYND-NASD; went to $300) and Very Good Food Company (VERY-CSE; $1.5 – $9 in 10 weeks) had great stock runs…but honestly, those are rare (pardon the pun).

But I knew some of the larger shareholders—and I also spent a lot of time on ZOOM with Marc Aneed and Mark Coles, and Dr. Eugenio Bortone, the CEO of their M&A target company Sapientia. Bortone’s team was a key part in developing the snack food called CHEETOS into a $2 billion brand.

It was really clear to me that these gentlemen were thinking very big, had the corporate track record to execute, and could raise the money to make it all happen. It involved debt and equity worth tens of millions of dollars.

So at 45 cents, I bought 750,000 shares. I wrote one of my standard reports for subscribers…and nothing happened. The stock stayed at 50-55 cents for over three months, with no news out of the company. Every subscriber could have bought as much stock as they wanted under 55 cents all summer long.

But with the people involved, I knew investors had a great shot at being ground floor on what could be a large food company, that could get institutional following in its stock.

I screamed at my subscribers all summer long that this was my favourite—to the point where they thought I was crazy. After all, it was a brutal summer for almost all junior stocks—across the board.

But this has been a great winner, and I think it the potential just got bigger with legendary investor, Saudi Prince bin Alwaleed joining the advisory team. When it comes to thinking BIG, few do it better than this man.

There’s a couple points I would speak to, that were part of my research. One was share structure—this company had more shares out than I would have liked. But you don’t attract people like Prince bin Alwaleed with a really small float with no liquidity.

Second, I mentioned that I ask who the big shareholders are.  If I don’t know, I ask who bought the last financing—I want people to name names and networks. I figure out who is really driving value here, and who is not.

I don’t get into bed with just anyone.

And when you buy a micro-cap, you usually have to stick with it for awhile. The cheaper the stock, the more time and higher risk it is. So knowing who you are in bed with as a shareholder—and their track record—is important.

I’ve passed on many stock ideas because of management track record. They either couldn’t get their previous business going, or couldn’t make the Market care about their success.

In the micro-cap market, it’s usually hard to do much fundamental analysis—or even technical analysis.

People are truly the most valuable commodity.

Eat Well Group just added One Very Valuable Commodity in Prince bin Alwaleed. I think this story is just getting started, but subscribers at InvestingWhisperer.com have already started to reap the benefit.

My next subscriber pick could come at any time. To be ready, click here.