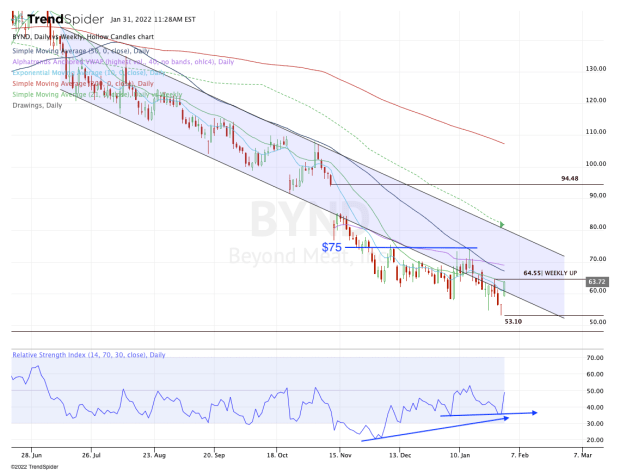 Beyond Meat's chart suggests that the stock is trying to bottom. Here are the levels to know now.

While the stock market is enjoying some follow-through from Friday’s rally, Beyond Meat  (BYND) - Get Beyond Meat, Inc. Report stock is really ripping.

The shares of the El Segundo, Calif., plant-based-meat producer are up double digits percent on Monday. Helping drive the stock's gains is a double-upgrade to an overweight rating by the analysts at Barclays.

Further, they assigned a price target of $80, implying roughly 40% upside from Friday’s close.

That said, this stock has not been able to get out of its own way. The shares made new lows on Friday before rebounding 6.5% from the low to close near flat on the session.

At the time of the latter — which came in early January — Beyond Meat stock looked vulnerable to more downside, which is what I wrote when I looked at the chart.

Now, it's rallying. Will the move to the downside finally end?

When I look at the chart for Beyond Meat, it’s hard to ignore the massive downtrend in which the stock has been stuck.

It’s also hard to ignore the bullish divergence on the RSI reading, which occurred when that indicator failed to make new lows, even as the stock was hitting new lows.

With today’s rally, Beyond Meat stock is back above channel support and the 10-day moving average. It’s currently trading near the 21-day and is just short of last week’s high at $64.55.

Aggressive longs can consider being long over today’s low of around $59.

If the stock were to lose today’s low, Beyond Meat not only becomes vulnerable to a gap-fill back down to Friday’s high but it also would sit below the 10-day moving average and channel support.

On the flip side, if we do get a weekly-up rotation over $64.55, that could put the 50-day and the daily VWAP measure in play in a hurry.

Above those two measures and the $75 level could be next. This level was support in early November and resistance once it failed as support. As far as I can tell, channel resistance is still in play.

While I don’t know that the downtrend has ended, Beyond Meat clearly is trying to bottom.