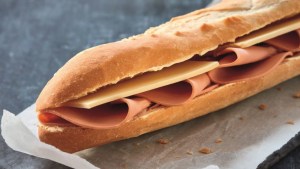 The baguette features Quorn’s plant-based ham and Violife’s dairy-free cheese. It can be ordered hot or cold.

This isn’t Gregg’s first foray into the vegan scene. In 2019, the chain released a vegan version of its popular sausage roll. The launch was a hit; Greggs credited the new product, in part, for its subsequent 14.1 percent increase in total sales.

The boost in sales motivated Greggs to give out £7 million to its roughly 19,000 employees.

Later, the company launched vegan steak bakes in 1,300 of its locations in the UK. A spokesperson for Greggs told The Grocer that its popularity was ‘bigger than anticipated’.

“Our team is working hard behind the scenes to meet demand,” they said.

Even Greggs’ CEO Roger Whiteside tried out a plant-based diet in 2019, although it’s unknown whether he still adheres to it.

Demand motivated supermarkets like Iceland and Asda to stock some of Greggs’ vegan options themselves.

“We are constantly looking for new ways to increase customer choice,” said Preyash Thakrar, the Chief Strategy Officer at Asda. “By partnering with brands that fit with our core values of great quality and great value – like Greggs – we’re excited to be able to give our customers access to something new in store that we know they will love.”