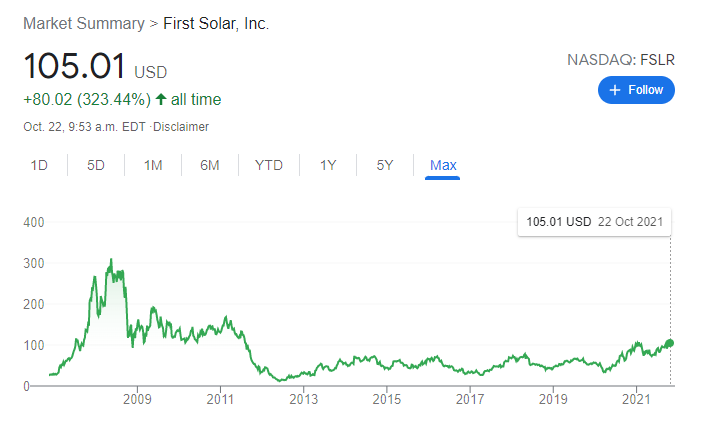 I was looking for companies to invest in that were both ethical and environmentally friendly, but I kept seeing lists with companies like Hewlett Packard and H&M…what?

So I gave up on that and came up with my own list of green stocks that you’ll hopefully find useful as well.

The businesses in this section are renewable energy companies that are easy to invest in (i.e. on a major exchange).

I’ve excluded any borderline companies like Canadian Solar and JinkoSolar that are large, but also linked to Uyghur slave labor (not 100% proven as far as I know, but still not a great look).

Clearway Energy is traded on the NYSE under the symbol CWEN.

The company develops and operates a variety of solar and wind projects in several states in the U.S. It seems like an ethical company to me doing important work.

First Solar is one of the largest solar panel manufacturers. It’s based out of America and is traded as FSLR on the NASDAQ exchange.

The company went public in 2006 and got decimated by the recession. However, it has produced good returns since 2012.

Sunpower is another large and publicly traded solar power manufacturer. It builds photovoltaic cells and storage solutions for both homes and businesses.

It’s traded on NASDAQ with the symbol SPWR.

Currently, Sunpower is one of the fastest growing solar companies worldwide.

Traded on NASDAQ as ENPH, Enphase Energy produces solar microinverters for both residential and commercial applications.

While this isn’t a page about how solar power works, microinverters in this case are used to convert DC energy (from solar panels) into AC energy for use.

The company is based in California and has over 1 million installations worldwide while still growing quickly.

Vestas Wind Systems is one of the largest wind turbine manufacturers in the world. Considering wind energy demand continues to grow, it’s in a great position in the coming years.

Northland Power was founded back in 1987, so obviously it hasn’t always been focused on green energy.

However, if you look at their current projects, most are solar and wind, although there are a few natural gas projects as well.

Given that, I thought it was reasonable to include Northland Power on this list. It’s based in Toronto and is traded as NPI on the Toronto stock exchange.

Bloom Energy is one of the few public companies that produce fuel cells for electricity.

It’s arguably the least proven and riskiest clean energy option at this point compared to solar and wind, and the company has largely been unprofitable (subsisting on VC funding).

It’s listed as BE on the NYSE, and it will be interesting to see how the stock performs in the future.

There’s not a ton of options when it comes to green transportation stocks.

Some companies like Ford are being a little more aggressive than other vehicle manufacturers when it comes to electric, but they’re not an environmentally friendly company by any means.

Everyone knows Tesla, so I’ll keep this short. It’s the largest electric-only vehicle manufacturer, and is based out of California.

You’ll find the stock on NASDAQ with the symbol TSLA.

I will note that some people don’t know that Tesla also sells battery energy storage and even solar panels in addition to cars.

The company has also acquired car sharing programs, so it’s having quite an impact on reducing emissions of transportation.

It’s stock is BLNK on the NASDAQ exchange and has produced some huge returns going into the 2020s.

If you’re interested in electric vehicle charging companies, ChargePoint is another big one.

The company is traded on the NYSE as CHPT, but hasn’t produced great returns yet as it struggles with profitability.

Eating meat is responsible for a large share of greenhouse gas emissions, and isn’t considered ethical by vegans either.

Plant-based meat alternatives or even lab grown meat are solutions to this area of concern.

I have a detailed page of vegan companies to invest in, but here are a few that I’d like to highlight.

Beyond Meat was the first meat alternative producer to go public, and is by far the largest company in this segment. Impossible Foods is the only major competitor, but it hasn’t gone public.

Their products like Beyond Burgers and Beyond Sausages have proven to be popular with both vegetarians and people looking to reduce their carbon footprint.

You’ll find Beyond Meat traded on NASDAQ as BYND.

While the environmental impact of dairy isn’t as bad as meat, it’s still not great.

Plant-based milks offer a much more environmentally friendly option, and a very similar taste to dairy milks. As an industry, plant-based milks are growing rapidly, to the point of already putting some dairy farms out of business.

Oatly is based in Malmo, but operates globally, and is one of the largest plant milk manufactures. It’s traded as OTLY on NASDAQ.

For the time being, Agronomics is the only public lab grown meat company to invest in.

It’s an investment company traded on the London Stock Exchange (as ANIC) that invests in companies that are developing and selling cultivated meats.

They hold equity in many of the most promising lab grown meat startups, including:

Are There Any Green ETFs?

I prefer investing in ETFs compared to individual stocks, but unfortunately there aren’t many good options for ethical ETFs yet.

Here’s where we stand…

Despite having a dated website, the First Trust Global Wind ETF seems pretty legit to me.

You can find this ETF on the NYSEArca Exchange under the FAN symbol. It hasn’t produced great returns historically, but as wind energy becomes mainstream, that could change.

The name of this ETF sounds amazing, but doesn’t deliver on what you probably have in mind.

This is essentially a standard index ETF where the worst offenders (i.e. oil companies) are removed.

In reality, it ends up having a ton of technology companies, many of which are arguably unethical in some ways, and certainly not businesses striving to improve the environment.

I feel like I had to include this ETF on this list, but personally I don’t consider it a green or particularly ethical investment option.

The post Green and Ethical Companies to Invest In: 2022 Public Stocks appeared first on VegFAQs.