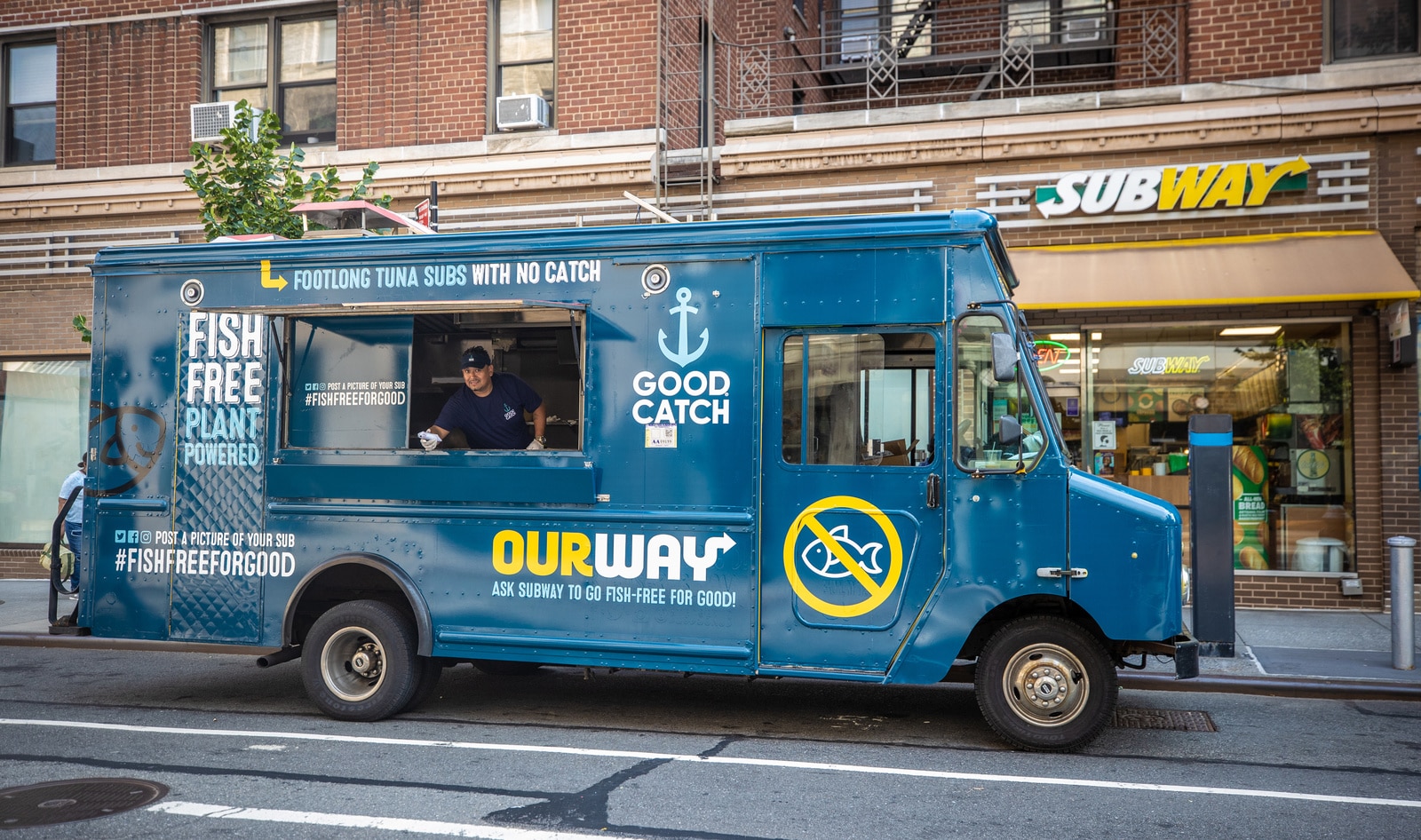 Today, vegan seafood brand Good Catch Foods is giving out fish-free vegan subs from a van parked outside of select Subway locations in New York City, NY, Austin, TX, and London, England. The van is outfitted with an “OurWay” logo, a reference to Subway’s longtime “have it your way” slogan, that points to fish-free tuna as the future of seafood. Throughout the day, the van will offer passersby free footlong vegan tuna sandwiches “with no catch,” and no bycatch—a term that describes marine animals such as dolphins which are inadvertently caught by commercial fisheries.

Inspired by the popularity of recent documentary Seaspiracy, Good Catch organized the event to bring awareness to the dire need to move away from commercial fishing, which is projected to lead to the collapse of all sea life populations by 2050. The one-day event is meant to shed light on the fact that tuna is highly overfished and encourage Subway to ditch fish for plant-based alternatives, while giving Subway customers a taste of a truly sustainable fish-free alternative.

“Our mission is to make plant-based seafood that’s good for the sea and all life who call it home. Large commercial fishing is one of the most destructive activities in our oceans,” Chad Sarno, co-founder and Chief Culinary Officer at Good Catch, said. “We can do better. We’re here to offer great tasting seafood alternatives without bycatch, mercury, or environmental damage.”

The event is part of a larger social media campaign that demands Subway to ditch fish for good. To participate in the campaign, Good Catch is encouraging ocean lovers to make their own fish-free subs and post a photo on social media with a @subway tag to urge it to go #FishFreeForGood.

A lawsuit filed against Subway by two customers earlier this year alleged that the sandwich chain’s tuna did not contain any fish. The lawsuits sparked a New York Times investigation which looked into the composition of Subway’s tuna. A lab analysis about the DNA of the meat returned inconclusive results, which sparked headlines about Subway’s tuna being free of fish.

Subway’s CEO John Chidsey has since responded claiming that the chain is serving “100-percent real tuna” and explained that the fish DNA is denatured during the cooking process. The chain recently underwent an “Eat Fresh Refresh” menu overhaul—making what it said were improvements to a variety of menu items and ingredients such as proteins and breads. However, Chidsey said Subway was “proud” of its tuna and left it alone.

Whether Subway’s tuna is real fish or not may be up for debate, but Good Catch is hoping Subway uses this opportunity to really refresh its menus by moving away from seafood and embracing plant-based alternatives instead.

“With the Subway news grabbing headlines across the globe, this is the perfect moment to inform people that there is a better way to enjoy the taste and experience of delicious seafood without [harming] our oceans,” Sarno said. “We want to encourage Subway, and other businesses, to add fish-free options for goodness to all.”

Making vegan seafood with no catch

Chef brothers Chad and Derek Sarno founded Good Catch with the mission of creating a new wave of seafood, made with a blend of six legumes. The brothers released their first product line in 2019, a vegan version of tuna pouches in three flavors: Mediterranean, Naked in Water, and Oil & Herbs flavors. The brand has since expanded its offerings to include vegan crab cakes, fish cakes, fish burgers, and breaded fish filets.

Since launching, Good Catch has raised about $50 million in investment capital through its parent company Gathered Foods and is backed by celebrity investors such as Paris Hilton, Lance Bass, and Woody Harrelson. Last year, the vegan seafood brand entered a partnership with Bumble Bee Foods, marking the first time a major seafood brand has partnered with a vegan company. The partnership will result in Good Catch leveraging Bumble Bee’s sales, distribution, and logistics expertise to make its vegan seafood products accessible to a wide range of customers at affordable prices.

Our guide to ordering vegan sandwiches at Subway can be found here.