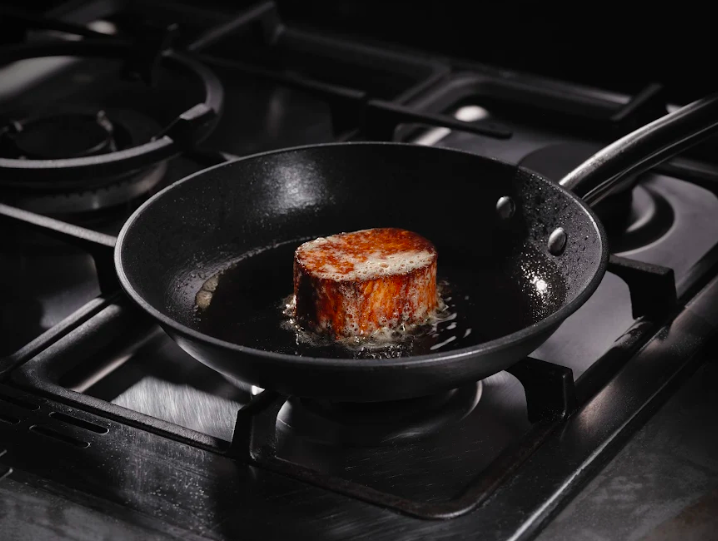 No, Juicy Marbles isn’t the name of a video game that should be vetted to gauge whether it’s appropriate for kids or adults. It’s a legit company out of Slovenia that recently rolled out what its founders say is the world’s first plant-based steak.

The company’s work has resulted in a product that very closely mimics the texture and marbling of a cut of beef, and the company says its technology will allow it to produce these plant-based “steaks” at scale.

So, what are the base ingredients comprising what the company describes as its patent-pending “Meat-o-Matic 9000” technology? The steaks are derived from a relatively short list, which includes soy protein concentrate, wheat protein isolate, sunflower oil, beetroot powder, kappa carrageenan, methylcellulose, yeast extract, iron and vitamin B12.

As is the case with plant-based products made by brands including Gardein, Impossible Foods and Beyond Meat, a tried-and-true meat eater will be able to tell the difference; one isn’t going to be fooled into believing that they are dining on a $100 entre at the likes of Morton’s or Fleming’s. But an exact plant-based imitation isn’t the point, said a Juicy Marbles representative with whom TriplePundit spoke briefly earlier this week. “Some of the founders are meat eaters themselves, but they are aware of the impacts that the meat industry has on the planet and they are determined to do something about it,” she said.

The company cites statistics that have been behind its mission, such as estimates that beef production alone uses almost 60 percent of all agricultural land on the planet but provides less than 2 percent of calories consumed across the globe. Further, about 2 billion people struggle daily with food insecurity as the result of systemic inequalities across the world’s food production systems – a number that increased during the pandemic.

Further, critics of the global meat industry have long criticized its ties to deforestation worldwide, which certainly applies to Juicy Marbles’ home country. While more than 60 percent of Slovenia’s land is covered in forests, the country has lost approximately 4 percent of its tree cover since the turn of the century.

“What’s interesting about the challenge of fixing our food system is that solutions need to protect the environment and culinary traditions at the same time. The culture around meat is beautiful and needs to be preserved, as it brings us together in celebration of life and just being together, present and alive. If we keep the culture, and just remove current means of production, we’re going to have a good time in the future,” said Vladimir Mićković, one of Juicy Marbles’ co-founders, in an emailed statement to 3p.

On that point, don’t expect that exact filet mignon beef mouth feel, but if one considers replacing a cut of beef with Juicy Marbles’ plant-based cut for a recipe that usually requires shredded beef, have at it, said the company’s spokesperson.

Currently, the plant-based steaks are available online. By late 2022, Juicy Marbles says it will roll out its products to restaurants and retail. Future plans include the launch of more “cuts” such as tenderloin, ribeye and sirloin. For the company’s filet mignon, one pack of steaks currently retails for about $40 for four four-ounce steaks. Larger orders come with free shipping. The company’s current capacity explains the price, but within one or two years, Juicy Marbles says it could meet and even, pardon the pun, “undercut” the price of conventional meat.

Consumers have responded in kind: Juicy Marbles sold out its inventory eight hours after the filets launched; the company anticipates its next shipments to drop mid-June.